When you've been hearing about a movie as long as most of us in the geek community have been hearing about Kick Ass (which has been for awhile, but really kicked into gear after the presentation at ComiCon last July), it starts to become a movie that is either awesome because you've got yourself so geared up for it, or tremendously disappointing because nothing could ever live up to the hype.

Luckily, it's a really tremendous comic book movie. Co-writer/director Matthew Vaughn (Layer Cake, Stardust) presents a fully-digested consideration of comic books, fan culture, and the meaning of superheroes, a kind of less-serious version of what Watchmen (the film) wanted to be. With a keen eye for iconography and completely lacking in fear to face up to the absurd (the costumes make no attempt to hide their homemade quality), Kick-Ass is truly the first superhero film of the new decade.

The Losers is a really good litmus test film. You can show it to someone and know instantly if they're the kind of person to like a movie because of what they think they're getting from it rather than anything they actually are getting from it. The Losers is out to be a sort of charming-guys-on-a-mission movie, but the characters are only passably charming (there's very little to the characters, period), and the mission is fundamentally stupid.

No, not that silly rock band! The real blood, real sweat, and real tears of filmmaking! Well...ignore my inability to title posts and just read my new article at Shadowlocked by clicking on the mighty purdy image below:

In a post-Behind The Music world (man I miss that show), we all know the movements of the rise-and-fall-of-a-rock-group story. This makes it all the more important to imbue the story with something different, something distinct, or to tell it from a different perspective or a limited timeline. The Runaways almost has one of these things, in that it feels just as sleazy and filthy as the group itself. The tone feels completely right, and I don't want to discount that, because that's difficult to achieve. But that's also to say that The Runaways, as a band, are sleazy and filthy as show; beneath the surface they're an almost-decent group with the usual trappings of a band dynamic. Similarly, the film is an almost-decent one with the usual trappings of a rock n' roll picture.

So while it's difficult to point to its failures, beyond a sort of been there, done that vibe, it's much more difficult to point to its strengths, beyond the performances of Kristen Stewart, Dakota Fanning, and especially Michael Shannon. Stewart's exactly in her wheelhouse, imposing classic '50s method acting into the larger-than-life Joan Jett, while Fanning is either uncomfortable in her role, or playing a character uncomfortable in hers. Either way, the result fits. Shannon, meanwhile, is completely out of his mind, displaying the dedication one could only expect after his work over the last three or four years in a role only a step or two removed from Christopher Walken's in the Blue Oyster Cult sketch on Saturday Night Live (replace "cowbell" with "jailbait," and the two characters could hardly be more similar).

Its central failure, however, is in coming up with any kind of conclusion as to how The Runaways happened. According to the movie, one need only to assemble a halfway-talented group of performers, yell at them a lot, and bam, instant record deal. Stewart, as Jett, spends much of the movie trying to get the group to focus on the music, but what little music-writing we see is typically accomplished spur-of-the-moment, and completely formed. And whatever one thinks of The Runaways' music, that's just not how music happens. Moreover, whatever work they put in amounts to very little - there's nothing in this film that feels the joy of accomplishment the way we saw The Wonders react to hearing their song on the radio in That Thing You Do. Consequently, there's no great loss to the group disbanding near the end of the film. They never really seemed to be all that close (except, you know, for that one time), and they never really seemed to care all that much. 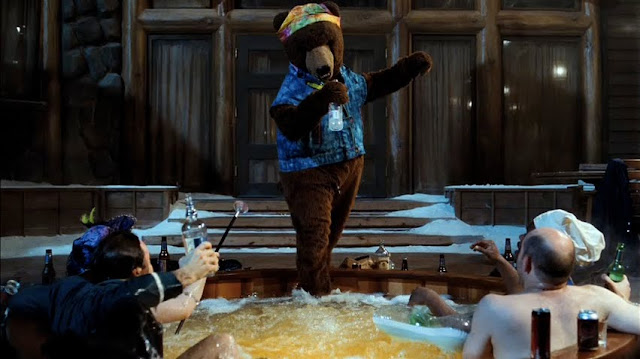 God did I hate Noah Baumbach. I found his previous two films, The Squid and the Whale and Margot at the Wedding not only contemptible, but full of contempt themselves. To say I gained nothing from watching them would be an understatement, as I actually feel as though I lost something in the process as well. So when I say I was angry at being enticed by the trailer for Greenberg, you know what I mean. And if I were a more bitter man, I'd probably be just as angry that I actually really loved the damn movie, too.

Is this because it feels like the most compromised of Baumbach's last three films? True, it still features an unlikeable character at its center, but most of the characters are downright charming, if just hopelessly sad. It's far more by-the-numbers in its plotting than his last two films - I'd wager Greenberg makes one or two totally unexpected, horrible decisions during the film, whereas nearly everyone in the previous two would constantly surprise us with their depths of depravity. But, as I thought walking out of Margot at the Wedding, perhaps this is a filmmaker who could use some taming.