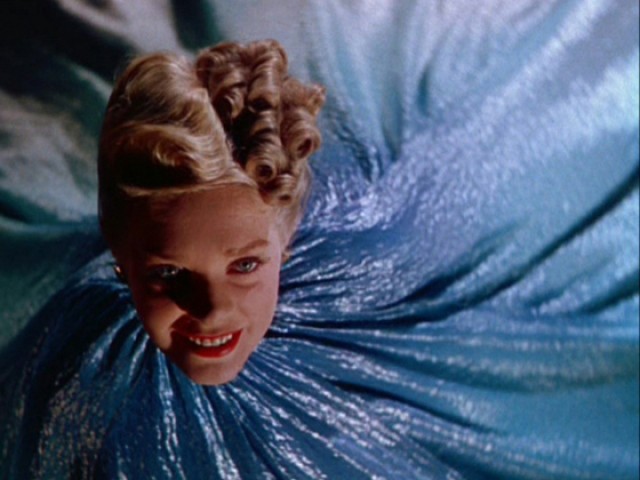 As one would imagine with a film not only choreographed, but totally directed by Busby Berkeley, 1943's The Gang's All Here is not terribly motivated by, nor concerned with, the emotional tension for which many other directors would mine its premise. Concerning a soldier who falls for a nightclub singer, in spite of his unspoken, family-bred engagement to a nice suburban type, and the various machinations that result in them all coming together for a weekend at the country, Berkeley's Technicolor wartime spectacular doesn't even approach the conflict with a depth of a romantic comedy. Rather, his premise allows him to move effortlessly from one jaw-dropping musical number to the next, a never-ending carousel of the set pieces typically reserved for the finale of the films with which he was previously involved (Gold Diggers of 1933, Footlight Parade, etc.).

Yet I don't buy the tag that Berkeley purely exploited the human form for his own mechanistic whims. For one, The Gang's All Here contains a great deal of pictorial romance, from the gleaming (and, it should be noted, gloriously inauthentic) starlight to the opening shot, bathed in near-total darkness, to some visions towards the end that I dare not spoil by failing to describe them. Let's just say Berkeley was very attuned to the possibilities of the "moving picture." 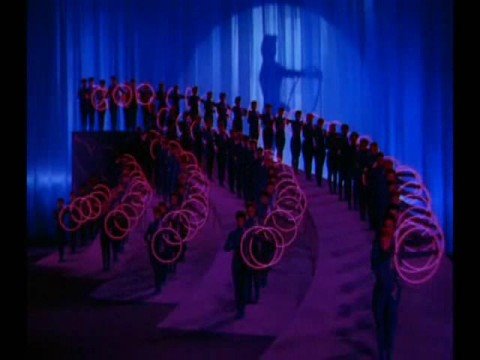 But more than anything, Berkeley's work feels overwhelmed with the joy of collaboration, the possibilities that exist when you throw people together to create one glorious collage. And rather than feel dehumanized, there's actually a charming disharmony to the movements, a sometimes slight, sometimes rather pronounced reminder of a number's underlying humanity. A couple people will come in slightly off-beat, or one will land just off their mark, and while it's easy enough to say, well, you can only get it so perfect, that assumes Berkeley was aiming for perfection, which I doubt. These are, in essence, grand experiments, the kind that can only be tested on a large scale, and it feels like Berkeley was as interested in the results as he was in his vision.

To take that point a step further, this kind of massive collaboration casually builds up the necessary public morale at an uncertain time, certainly through the Depression but especially during the war years. A "we're all in this together!" mentality wasn't just espoused by the propaganda machine; it was embedded in the public conscious (and, for that matter, conscience). Without coming right out and saying it, Berkeley was illustrating what amazing things can be created when people pool their talent and resources. Which, to me, is far more inspiring than the standard triumph-of-the-individual narrative so pervasive in Hollywood cinema of any era.

The Gang's All Here is playing for the next few days at Cinefamily in Los Angeles in a brand-new, astounding 35mm print. Beyond the more esoteric qualities to which I alluded above, it's just a gas of a picture, constantly keeping your feet a-tapping and your face a-smiling. See it.
Posted by Scott Nye at 1:55 PM

Brilliant! This is a really marvelous stuff for me. Must agree that you are one of the coolest blogger. I was curious to see a stuff like that. Fabulous post!

From the tons of comments on your articles,anna games I guess I am not the only one having all the enjoyment here keep up the good work.free music games