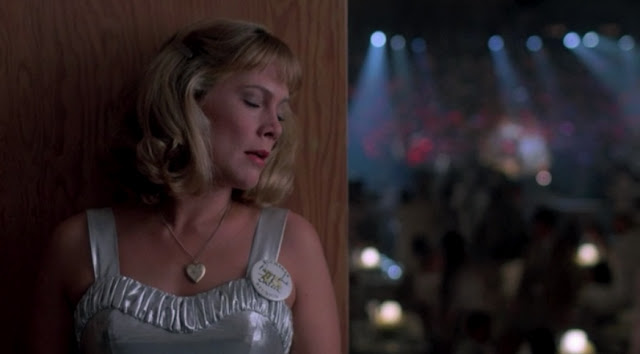 Is it okay to criticize a film for having the wrong ending?

Peggy Sue Got Married is one of those many films Francis Ford Coppola made in his "coming back from bankruptcy" phase, and one which I came to watch as an effort to see all of the man's films I'd not yet in more-or-less chronological order (I'll be doubling back on his 1960s works later on). There's a lot to recommend the film on, not the least of which are early performances by people who went on to be stars and reliable standbys (including Kathleen Turner, Nic Cage, Joan Allen, Kevin J. O'Connor, Jim Carrey, and Helen Hunt), but most excitingly, it plays as a very stripped-down, more personal version of Back to the Future, more forcefully confronting the 1980s' nostalgia for the '50s/early '60s and exposing its emptiness, before, sadly, finally succumbing to that sentiment itself.

Peggy Sue Bodell (Turner) goes to her 25th-year reunion (she graduated in 1960), haunted by her recent separation from her high-school-sweetheart husband, "Crazy" Charlie (Cage, embodying the crazy through and through), and woefully out of place upon arrival in a dress she'd hung onto since those happy days. Nevertheless, she's the bell of the ball, winning the equivalent of Prom Queen, alongside a former nerd who, surprise surprise, became quite the business tycoon in the years since. But Charlie had just arrived as she won, and, overwhelmed by everything going on around her, she faints, and, inexplicably, awakens in 1960, just as her senior year of high school is coming to a close.

The film never explains her trip, and there are later hints that it was far more than the extended hallucination one might be tempted to see it as. Even when it threatens to get into the realm of practical fantasy as Peggy tries to return to 1985, it thankfully diverts back towards the mystery. Though it inevitably resorts to the some of that knowing, wink-wink humor (Peggy giving ideas for inventions to people, mostly), the film spends a great deal of time in 1960 showing her make the exact same mistakes she made in high school, falling all over again for her future-cheater of a husband, staying out too late with the wrong crowd, throwing her sexual caution to the wind, and ignoring those who have her best interests at heart. She's pretty insistent early on about correcting her old mistakes, telling Charlie the first chance she gets to take a hike, but especially as she wasn't the one who broke up their marriage in 1985, she's not particularly resilient to a very direct reminder of the man she fell in love with in the first place. She's more a teenager than she could have imagined or expected, impetuous, losing sight of herself even as she recognizes the singularity of an experience she's, ironically, living twice.

This is strong, potent stuff, particularly as Coppola's direction (and Cage's uniquely off-putting portrayal of Charlie) tell us he couldn't possibly be right for her, and her late discovery and declaration that she doesn't want to marry anybody, be it Crazy Charlie, beatnik Michael (O'Connor), or brain Richard (Barry Miller), all of whom propose to her in one form or another, feels perfectly in tune with her character's development and the film's themes of revisiting your past to account for your present. "Peggy Sue got married," she cries, repeating the title not in a sense of celebration, but of mourning. That's her whole life, she says, the entire encapsulation of her adulthood. And now she has a chance to change that.

But then she wakes up. Charlie is by her side, and apparently had been for the entire time she'd been out. The only change in their relationship is that she was perhaps a little bit more resistant to him back in the '60s, but that doesn't seem to have changed anything for their present - Charlie still had a fling with a much younger woman, they still had kids at a very early age, and Charlie's youthful dreams of pop stardom still landed him running a family-owned appliance store that's turned his local celebrity into something of an embarrassment. There's a mention late in the 1960 game about the importance of her kids to her, and obviously they wouldn't be around if she didn't marry Charlie, but if that's the deciding factor here, she should have been a little bit more enthused about them throughout the film. Besides that, there's nothing from a character perspective keeping her there, and yet that's precisely what she decides to do - continue trying to win him back.

In terms of storytelling, Peggy Sue goes through a tremendous amount of effort to grow not at all. She still pines for her dirtbag husband, but how are we supposed to take her final decision? The screenplay's tone is decidedly triumphant, recalling a conversation she had in 1960 with her terribly-kind grandmother, but Coppola puts a weirdly otherworldly touch on it with a mirror illusion he established at the opening. It still seems the film is trying to leave us happy, but over what? That she decided to forgive her husband, even though his remorse was purely selfish?

Finally, thematically, this totally goes against the film's established purpose, leading one to wonder what the purpose was of it at all. And so I return to my initial question - does this regressive ending undo everything interesting the film had already established? Not totally, I'd say. So much of the narrative tension hinges on the titular declaration, and in what manner it is fulfilled, and it'd be hard for me to call it a successful film, let alone a very good one. And yet...there's so much in the interim that's suggested, occasionally realized, and often flirted about, an experience with which Coppola fans are not unaccustomed. There are moments of naked emotionalism in Peggy Sue, particularly toward the beginning and end, and some fascinating meditations on the limitations we possess in receiving and processing information in conversation that few filmmakers will ever touch on. Peggy is constantly saying things that don't make a lick of sense outside of the context of her time travel, but people around her just accept them and squeeze them into their own sense of reality (perhaps a comment on "the times" as well, but I think this theme is resonant in any setting).

I adore his certified classic films as much as we all do, but what I really admire about Coppola is found in his less obviously Great films, the minor works such as this, or The Outsiders, or Tetro, or One From the Heart, or most especially Rumble Fish (which should really be considered alongside the Greats, but that's another topic), this artistry tangled up in an unapologetic vulnerability that never quite allows for the total, mannered approach he took in the 1970s. Coppola will never be as reigned in as he was with The Godfather or The Conversation, and there are those who see his work suffer as a result, and maybe that's true. But it's resulted in a flowering of his artistry, and for that, I am thankful.

Nataniel R. wrote a very nice piece on the occasion of the film's own 25th anniversary, and the screencap at the top of his article is indebted to him for finding the defining moment in the film.

Roger Ebert, one of the critics who's best in tune with the intertwining of personal history, nostalgia, and art, wrote an especially fine review on the film's release.
Posted by Scott Nye at 3:41 PM

On the list of key cool gadgets how the women of all ages off a long time carry merged once going available are the Replica Omega really should carry quite a few details while using the lover and in many cases finish some sort of style history. It truly is only 1 apparatus for being fshionable together with healthy with the ladies garments. Electrical power principal style people which trade exclusive especially designed fake handbags many people are available for an amazing value together with can be found by using various. This is simply not about to indicate that you simply definitely not employ a especially designed event if you cannot have the funds intended for for getting primary persons considering you will see unique most of these reproductions of especially designed insurers easily obtainable with trade. It truly is only 1 remedy the reason that can help make a decision on counterfeited insurers simply because this prices usually are modest with regards to the primary hermes outlet. Counterfeited insurers together with counterfeited tote bags are typically one of many ideal variables while using the type cognizant potential buyers just who make it possible for considerably more main priority suitable for status on the modern-day contemporary society and perhaps there're moreover considerably more requested to produce nowadays. That motivation of counterfeited materials is growing attributable to more cost-effective fantastic on the totes within the loads on account of inflation. Undoubtedly unveiling, gucci handbag outlet however cheaper prices, there actually considerably more having magnitude. They give equivalent product or service simply because legitimate an individual that that can help within the dollars necessary for essentially 7 that can help 8 predicaments a smaller total in comparison with that model materials. A new matter to not forget about the counterfeited le boy chanel bags together with counterfeited tote bags are typically which quite possibly " experts " ignore to achieve that dissimilarities concerning legitimate and also the information.