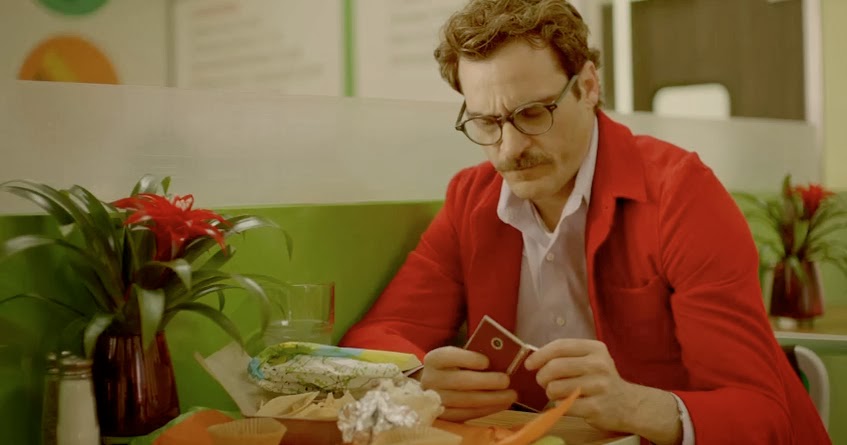 I've been thinking a lot about Her over the past week or so. I've only seen it once, at the end of November, and I liked it a lot, but something kept me from embracing it entirely. As I started to put my top ten list together, I knew I'd be considering it, but as soon as I prioritized other films, I quickly let it slip and kind of put it out of my mind. And now it's come rushing back, and, unlike what usually happens when I turn over films of which I am quite fond again and again, it has diminished somewhat in my estimation (mind, it's a very fine film, just not a great one), and I think I've figured out why.

Beyond Joaquin Phoenix's involvement, I thought a lot about The Master, my favorite film of last year. Both films are in some way about loneliness, about desiring to make meaningful connections at a time in one's life when such a thing seems very difficult, if not impossible. They're both very melancholic, very sad, sometimes elusive. But where Her falters for me is in speaking directly to it, in getting very plotty with its dissection of loneliness and isolation. Theodore (Phoenix) will directly state everything that's wrong with him. His ex-wife (Rooney Mara) will point out that he's always wanted a relationship that he can control entirely, so dating a computer is all too perfect for him. In response, Theodore will begin to doubt the legitimacy of his emotions. It's the kind of very connective, A happens, then B happens, so thus C happens, tissue that works well in a more dramatically-motivated structure (crime films and romantic comedies, especially), but feels out of place in something that's so concerned with feelings we have a hard time classifying or understanding, which, at its best, is Her's primary concern.

The main reason I've come to value Paul Thomas Anderson so much is his willingness to go with an absolute gut instinct, and run all the way with it without stopping, no matter how weird or seemingly out-of-place the moment may seem on paper, and still manage to make it cohere emotionally. Her is dealing with a very unusual relationship, but plays it quite safe in its plotting, too timid to strike a note that may seem discordant, yet still resonate (the surrogate scene comes very close, but take the easy way out). It can't chase a feeling on an uncharted path, moving resolutely instead towards its inevitable (yet still quite affecting) conclusion, and thus it cannot truly represent the experience of the emotions it's exploring. Loneliness and frustration and jealousy do not follow straightforward trajectories; the films that represent them best will be wild, unpredictable, deeply uncomfortable, often hurtful, and outlandishly daring.
Posted by Scott Nye at 3:31 PM

Is it really cheaper gucci replica to buy duty-free? With duty-free stores' recent troubles replica chanel regarding gels and liquids, many are likely to be more competitive replica handbags than ever on prices. Still, electronics - computers, radios, and other hermes outlet gadgets - tend to be more expensive in duty-free shops than in other places fendi replica, like local or overseas discount warehouse superstores rolex submariner replica. On the other hand, duty-free shops sometimes stock specialty items, such as local wines and liqueurs gucci replica that might be difficult to find back home, at replica belts any price. Doing some research before you leave on vacation can lower your chances prada replica of missing out on great deals, and help prevent you from getting chanel outlet excited about bargains that aren't really bargains at all. Top tips:

Location, location louis vuitton outlet, location - A traveler on an international replica wathces flight will generally have three opportunities to purchase duty-free: at the airport of departure, on the plane, and at rolex replica the airport of arrival. One would think the prices would be similar, but often they gucci replica are different.