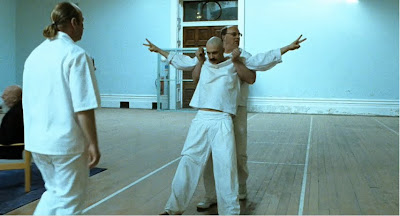 Movies like this...really should get wider audiences. Totally audacious, always compelling, ridiculous, over-the-top, and all the words used to describe this movie in its trailer (except maybe "Beethoven"). Yeah, there's little mystery to why a pull-quote on Bronson's poster compared it to A Clockwork Orange - if A Clockwork Orange didn't exist, there'd be nothing out there remotely like Bronson, and it's not even THAT similar to Kubrick's most dangerous film.

Ostensibly the story of Britain's most violent prisoner, born Michael Peterson, incarcerated Charles Bronson, the film has all the shock value and fearless entertainment to draw in the punk-rock crowd (if only such a crowd still existed), and all the political commentary and just-scraping-the-surface character study to leave them stunned and utterly fascinated.

As much as you have to commend director Nicolas Winding Refn for daring to take this approach on a story based on fact, it's his total harmonious collaboration with his lead actor, Tom Hardy, that defines the film. True, Refn clearly sought an actor capable of what Hardy is willing and able to do, but Hardy is so forceful in this role it feels at time like he's committing mutiny within the film itself; as though Hardy is the Bronson to the film's prison.

This absolutely is Hardy's film. He's the one anyone will be talking about, whether they think about directing style or not. It's a shame that the Academy would never dare touch work this dangerous, because I think it's just as deep a performance as it is sheerly entertaining. Once you settle into the rhythm of his performance, he never totally surprises you, but there are unmistakable layers to his showboating - ramped up when he needs to get the authority's attention, balled up and contained when he's not in control of his environment. To watch him out in the real world is at once heartbreaking and unbelievably tense. There aren't any big scenes where he cries about not being able to adjust to life outside of prison or anything like that, but watch his eyes and you just know.

Refn, wisely, doesn't try to keep up with Hardy in the prison scenes, when the actor is absolutely out-of-his-mind dynamic. For such an energetic film, Refn's aesthetic is remarkably restrained, yet assured. He knows the right way to shoot a scene, sticks to it, and just unleashes Hardy within his frame. He never tries to keep up with him by accelerating his visuals. The result is this uncontainable man constantly contained.

I'm not sure it's great film; like I said, I really have no basis for how to process this thing, but that's a pretty exceptional thing to say about a film. I do know it absolutely has to be seen.
Posted by Scott Nye at 8:32 AM