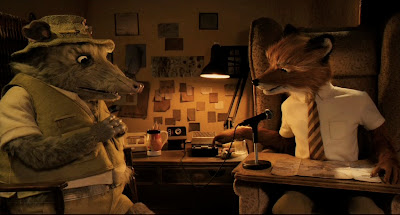 I complain about this a lot, but it's really hard writing reviews of movies I love after only seeing them once. I can write pages about the ones I've seen over and over again, but when a new movie comes along that I totally fall for, it can be a little tricky.

Wes Anderson is a big reason I'm as into film as I am. The Royal Tenenbaums was a movie I heard about in the A&E section of the newspaper when I was fifteen, and after a summer that brought me Zoolander, I was absolutely ready for anything with Ben Stiller and Owen Wilson. It didn't need to be as good as it was to satisfy me, but at the time, it was better than anything I'd ever seen. It felt real and fresh and, even though I didn't have the words for it at the time, artistically vital. When you're fifteen, you see a lot of movies that anyone could have made - nobody else could have made The Royal Tenenbaums. That's powerful stuff when you're fifteen and came off a summer that included Rat Race, Evolution, and America's Sweethearts.

My unbridled joy at discovering this whole other...THING out there in this world was matched only by my disappointment that Anderson was unable to reclaim that magic with The Life Aquatic and The Darjeeling Limited, two films I've come to appreciate and even like quite a bit, but which always seemed to lack that certain...something. Had I just gotten my fill of Anderson's vision, or were they really lacking the touch that made Tenenbaums, and later Rushmore, mean the world to me?

Fantastic Mr. Fox, an indescribable work of unbridled genius, suggests the latter. Anderson's overflowing aesthetic inventiveness is right at home is a world built literally from scratch, but this isn't as simple as a diorama in motion, though it'd still be pretty wonderful for that. No, like other memorable Anderson creations Royal Tenenbaum and Steve Zissou, Mr. Fox is a showboat well past his prime, dependent on his ability to maintain a version of himself that probably never actually existed, who must come face to face with the reality of who he is. There are few dramatic scenarios more sympathetic than watching someone realize they aren't half the man they thought they were. Even when acted out with puppets. 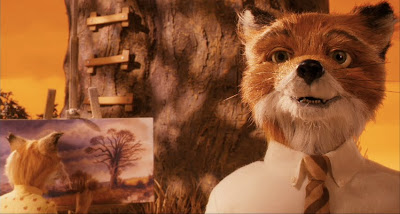 It doesn't hurt when that puppet is voiced by George Clooney, who has the good fortune to possess one of the most compelling voices in modern cinema. Plus, Wes Anderson films benefit tremendously from a main actor bringing an outside sensibility to the project. A big part of the reason The Royal Tenenbaums works so well is due to Gene Hackman and Ben Stiller; Owen and Luke Wilson, Angelica Huston, Gwyneth Paltrow, and Bill Murray are all totally on Wes Anderson's wavelength, which is tremendous, but a big reason The Darjeeling Limited is so, well, limited, is that all three leads are totally keyed into what Anderson wanted. It's clear that Clooney made some choices Anderson wouldn't have suggested, and the character, and thus the film, benefit.

For that matter, I really think Anderson stepped up his game here. In his last two films, he ached to create moments as spontaneously brilliant and deeply moving as the moment when Margot steps off the bus, Richie releases Mordecai to the swelling moment of "Hey Jude," or Max flying his kite as he dictates a list of guests to Dirk. As inspired by the music Anderson curates as those moments are, they were truly earned by the dramatic momentum up to that point, the particular rhythm delicately crafted not just in terms of narrative structure, but all the way down to the rhythm of the dialogue and the particular cadence of Anderson's populace, never mind his impeccable aesthetic. In Aquatic and Darjeeling, Anderson made the mistake of most audience members in assuming the right song could totally define such moments.

The film doesn't have nearly as many musical interludes as his previous work, and amazingly there are quite a few original songs in here (one of which leads to the funniest moment in the whole film), and every emotional moment is brought about purely through the characters and Anderson's mise-en-scene. Nothing is forced or goes unearned. There's a scene between Mr. Fox's son, Ash, and his nephew, Kristofferson, in the bedroom they're sharing, that's played out entirely in one shot and contains a world of emotion due entirely to the lighting, framing, and pace of the scene, and a few choice words of dialogue.

Like all of Anderson's movies, it feels much longer than it is. Not because it's slow or ever boring, but because in a mere 87 minutes, he's somehow able to create a world that is totally realized, artistically developed, and completely lived in. The past is a tangible presence in the Anderson universe, the agony of regret and ache for new opportunities permeates every scene.

I should mention that it's a lot of fun to watch, too, certainly more comedic than any of Anderson's films to date, but no less moving. It's a true joy, and I cannot recommend it enough.
Posted by Scott Nye at 1:08 PM