But Who Would Want to Watch It?

"And we generally say, 'Well, if that was in a movie, I wouldn't believe it.' Someone's so-and-so met someone else's so-and-so and so on. And it is in the humble opinion of this narrator that strange things happen all the time."

About a year ago, I was taking a class called Cinephilia: Forests and Trees. The title of the class would take another post to explain, but essentially we were diving into Auteur Theory head first. We were discussing Bringing Up Baby, which I was shocked to hear the majority of the class didn't care for. My professor was as well, and was probing people for why it didn't work for them.

And then it happened - "It wasn't very realistic, and the characters weren't believable."

This is one of the most common uses of shorthand criticism that actually doesn't say anything evaluative about the film. It completely dodges the concept that an unrealistic film could actually be a damn fine piece of entertainment. Or art.

We've become a culture that seems to prize reality very highly. It wasn't always this way; people weren't stupider in the 30s, they just didn't give as much of a shit that their entertainment be 'realistic.' It's why your grandparents didn't need some kind of device to explain why people were singing in a movie musical, it was just great to have people singing. Nobody cared how Superman managed to fly, it was just awesome that he did.  And I suspect that adults watching The Wizard of Oz in 1939 weren't 'fooled' by the painted backdrops, they just enjoyed the scenery for what it was.

None of that happens anymore. Photoreal is the buzzword in special effects, despite the lingering, nagging feeling that many of us have that we will always be able to tell a scene contains major FX work. We're no longer interested in suspending our disbelief but in having it completely vaporized. Movies about giant robots punching each other or a guy dressing up in a batsuit to fight crime must be mired in realism, in backstory and in minutia. On top of that, we demand naturalistic acting at all times, which is why so many people think the exaggerated and theatrical acting style of 300 is just 'bad' acting.

That's Devin Faraci in a recent article over at CHUD.com. He addresses a lot of the concerns I have about the way people evaluate movies nowadays, typically by asking themselves how closely it approximates the world they're familiar with. Which, inevitably, negates the possibility of an alternative artistic vision. It's not that art and realism are antonymous (Lost in Translation and Summer Hours are prime examples of how they can go hand in hand), and I think Faraci doesn't give audiences enough credit for how they approach scenery (the unreality of the production design of The Royal Tenenbaums did nothing to turn people away; then again, Eyes Wide Shut was critiqued for building sets of New York streets that were too wide - I swear to Christ this was actually a concern), but he's certainly right in regards to acting and character.

Recently, I saw Broadcast News for the first time. It was mostly a fine enough film, but I couldn't help think how much better it would be if done in the style of (or better yet, produced during the time of) the Golden Age of Hollywood, where people didn't have to act like real people. The whole thing could've used a lot more humor, a lot more life, and specifically my girlfriend and I debated the merits of William Hurt's character. Both of us agreed it was a fair, realistic portrait of a smarmy asshole, but I insisted he could have been given a lot more charm and a lot more life instead of being so vacuous. Yes, that's probably how he would be in real life, but what's so interesting about that?

Kubrick had this thing about acting that realism was fine, but interesting was better. As a result, he got some of the most memorable performances of all time from actors who either a) never did anything of much note besides that (Vincent D'Onofrio, Malcolm McDowell), or b) were rarely or never as much fun as they were with Kubrick (George C. Scott, Jack Nicholson). I've heard the "overacting" charge leveled again and again, but dammit if I'm not drawn in by their performances time and time again. 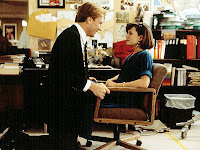 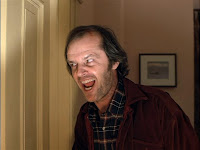 Really, who would you rather watch for 2+ hours?

And Bringing Up Baby, too. Yeah, obviously, most conversations wouldn't be so dragged out with misunderstandings and the rest. But it's HILARIOUS.

Alfred Hitchcock used to complain about moviegoers who refused to yield to the pleasures of narrative. “The plausibles,” he called them—viewers who, rather than enjoying one of his stories about two ordinary people caught up in some sort of sinister affair, would nag at minor details or ask, “Why don’t they call the cops?” To narrative filmmakers, the plausibles ask the wrong questions and make the wrong demands. They should care not whether a thriller is absolutely consistent but whether it gives good, nasty jolts.

Upon reading that again, I had to laugh, because I actually wrote an outline for a thriller* for this screenwriting class I was in, and my professor would not stop asking why the main character wouldn't call the cops, insisting that any person "like you or me" would call the cops as soon as things got a little sticky. The answer, of course, is that anyone who reacted to situations like me would make for the most boring movie on the planet. I'm terrified of upsetting authority figures, and no decision I would ever make would make for a compelling thriller. Nobody would ever watch a movie about me of any genre really. So you make things up. You have fun. You engage the audience with something they did not see coming; maybe because it's a little outside the realm of realism.

I'm not saying to totally work without some sort of structure. I'm just saying I enjoy it when a movie goes a little off the rails. What it really comes down to is the insistence that a film can only be a handful of things, and one of those things is, increasingly, "realism," or finding artistic truth in the mundane details of our own reality. Look, I'm surrounded by people who act like real people all day. Sometimes, it's nice to engage with a story that feels nothing like the world I know. Some people seek this escapism in the summer blockbuster, and that can be a great portal, but there's an increasing concern with trying to hook those into the realm of "realism" when really, what's the point? Why is one of the highest praise for summer blockbusters, or any movie for that matter, "it felt like it was really happening?"

This is one of the reasons I love Speed Racer so dearly. It absolutely departs from any semblance of reality, which is pretty thrilling in and of itself, but it also has more real heart and truth in it than the combined running times of Christopher Nolan's attempts at realism in the Batman films.


*Which wasn't really all that good in the end, but for none of the reasons my professor insisted on.
Posted by Scott Nye at 2:53 PM