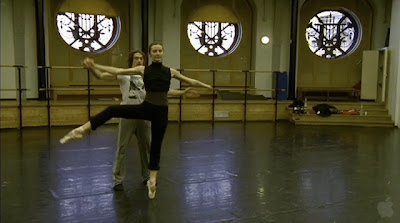 Ultimately, your opinion of this film is going to depend greatly on your temperament. For 159 very long minutes we're plunged headfirst into the inner workings, operation, and daily activities of the Paris Opera Ballet through the rehearsal and execution of several shows. I say "several" because it's clear they are showing us more than one, but as a guy who knows next to nothing about ballet, it was difficult to tell exactly how many more. If I were to guess, I'd say four or five.

There's no narration, no interviews, no intertitles or captions to explain anything we see. Consider it a bonus that it comes with subtitles for the parts in French. I'm told this is standard practice for director Frederick Wiseman, and I found it absolutely thrilling.

It does help that, if it's on film, I can be fascinated by watching people do absolutely anything. Maybe this makes me creepy, but I prefer curious. I never watch those shows that explain how a tree becomes a baseball bat, but I would watch hours upon hours that showed people going through the process of making a tree into a baseball bat. I think it's absolutely amazing to watch people go through what is to them a routine, and the ways they execute rote movements and exercises and process new ones.

And the process of assembling something as complex as a ballet is absolutely mind-bending. I can't dance, and I have no sense of rhythm or beats or anything, so watching people just naturally fall into this working rhythm...like I said, I find this stuff captivating.

It also helps that the film is at times bouyed by a meditation on the fleeting nature of dance as a career, what that means practically, philosophically, and (though we naturally only get a glimpse of this) emotionally.

The thing is that, because it's so spare and never once announces its intention, what you take from it will totally be your own thing (which is really one of the better results of art). This is what I saw in it. If you have the stamina for it, though (honestly, you've never felt 159 minutes go by so slowly), and if anything I described above sounds at all appealing, you'll flip for this thing.