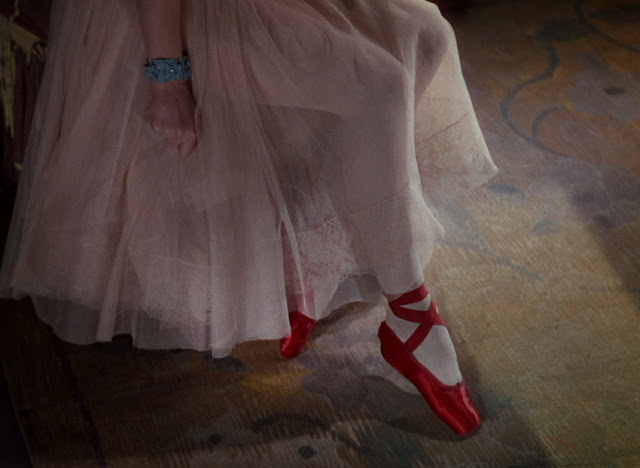 The Red Shoes, which I saw last weekend for the first time (I was determined to inform my impression through the recent restoration overseen by none other than Martin Scorsese), is one of the few films to have fully realized what movies can do; what they were capable of at the time (1948) and what they'll ever be capable of. I can count on one hand the number of films that have so overwhelmed my senses as The Red Shoes has, leaving me in a state akin to shock and unable, for days, to talk in any specific way about what I had seen. And I probably wouldn't need the whole hand.

I walked into it knowing nothing - to my surprise, the film is more influenced by than based on the Hans Christian Anderson fairy tale from which it takes its name - and came out knowing everything. The feel of the night air. The sensation of opening night, just before the curtain is drawn, the time in which anything is possible, for both the audience and the performers. Love, lust, betrayal, and heartbreak. The transportive, ethereal feeling of a fully-expressed work of art. The way light dances in the shadows and explodes with the slightest provocation.

Technicolor founders Herbert T. Kalmus and Natalie Kalmus are said to have hailed this as the best example of their three-strip process; no doubt they were speaking from a technical perspective, but I will gladly go a step further and say that color cinema itself would never know the extent of its possibilities had writers/directors/producers Michael Powell and Emeric Pressburger not taken this production upon themselves. It's not just the ballet sequence, which is so overwhelming I was at once begging for it to end and desperate for it to unspool forever more. It's the life they captured, the fairy-tale feel that seems so perfectly suited to Technicolor but was never totally appropriated until the moment the stream from the train propels into the air as Moira Shearer gazes off into the night. There are dozens more such moments in The Red Shoes.

I often disregard plot synopses in my writing, just as I skip them in my reading, and The Red Shoes is a perfect example of why. There is little point in doing so. The film is about the joy and the agony of giving everything you have to a concept that cannot be touched or held the way a lover can; what happens to elicit this is mere minutia.

Its highlight, the moment everything comes together in complete perfection, is the cinematic representation of the titular ballet the company puts on, with Vicky (Shearer) in the lead role. What begins as an audience's perspective on the proceedings soon transforms into something that could never take place in physical space, something that would be compared to painting if painting could move. Something that perfectly combines all of the crafts that form the art - costumes, production design, editing, cinematography, acting, music and sound - and creates a truly transcendent experience.

Doubtlessly this amazing print of The Red Shoes has already come and gone through your town - Portland is fortunate to receive such gifts, but still not fortunate enough to get them very quickly. It will be available in July through The Criterion Collection on DVD and Blu-Ray, and Lord will I have trouble resisting the urge to buy it.
Posted by Scott Nye at 11:49 AM