What I've Been Watching on TCM - UPDATED 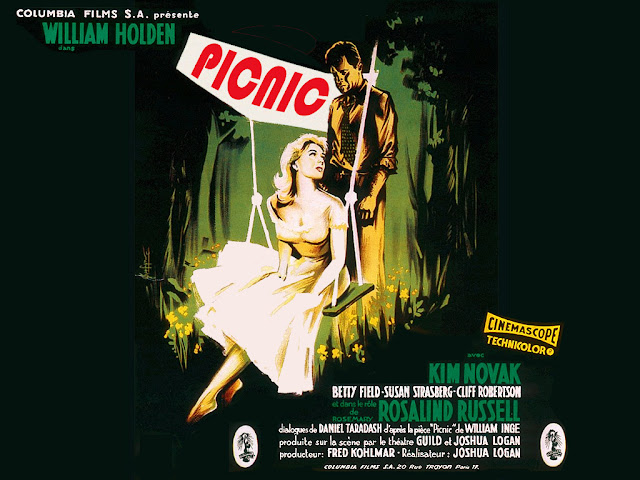 God I'm really loving having this. I may start doing a bi-monthly "What I've Been Watching" thing so it's not so much a huge ad for TCM, but for now I'm really just trying to get out the word about some really fantastic films, some of which are also available on DVD. And if nothing else, one more to watch for if they come through your local rep house.

Picnic (Joshua Logan, 1955) - I'm not a melodrama man by trade, but when it works for me, it really works for me. And Picnic really worked for me. Even though some of the actors can't handle the genre's bigger scenes (most unfortunately William Holden, a very fine actor in all other respects), there's a heart and a strangely hypnotic pace that sets in with this film. If any of the creative force had taken a more subtle route with the big conflict section, this could easily be one of my favorite films of all time; as it is, it's fine as my favorite classic melodrama (Minnelli, Ray, and Sirk fans are gonna come at me with pitchforks if they catch wind of this). A tremendous portrait of the disappointment in the unrealized promises of the postwar years, Picnic is unfortunately only available in 1.33:1 on DVD, robbing you of its most immediate virtue - its undeniable, frequently breathtaking, beauty. UPDATE: Picnic will be released in a Kim Novak DVD box set, allegedly in its proper aspect ratio, in August.


The Big Heat (Fritz Lang, 1953) - Doing for the crime film what Christopher Nolan did for the superhero with The Dark Knight, Fritz Lang was not one to shy away from the more horrific side of mob violence. Lang frequently attacked gray areas with a kind of relentlessness that can be oddly uncomfortable in a studio-era picture. As subversive as TDK is at times, one has to wonder what audiences thought of what Lang unleashes here (or in the superior Fury), which is so totally outside the bounds of the expectations set by his competition. That he and screenwriter Sydney Boehm balance this grimness with an unexpected note of hope in humanity, through a group of war buddies I could write paragraphs about, is what sets them apart from any modern comparison. The Big Heat is available on a very fine DVD release, so why not watch it?

My Darling Clementine (John Ford, 1946) - Although I tend to run hot and cold on John Ford, even his works that leave me a little uncertain leave a certain feeling in the air days after I've seen it. My Darling Clementine, aided tremendously by the titular song it reappropriates for the fictional romance between Wyatt Earp (Henry Fonda) and Clementine Carter (Cathy Downs), moves along with the pace and ease of a great folk song, never quite rousing us, nor putting us to sleep. Available on multiple DVD editions.

The Devil and Miss Jones (Sam Wood, 1941) - One of the true pleasures of watching classic films is getting to revel in certain foundational attitudes of American life that at the time were revolutionary, immediate in a way we can only guess at. The formation of a workers' union is one of the great achievements of the twentieth century, and though The Devil and Miss Jones (not to be confused with porno The Devil IN Miss Jones) is a comedy with a plot that would later be used as the foundation of Undercover Boss, it quickly assumes a rare sort of social importance that is at once unforced and completely front and center. If ever the phrase "they don't make 'em like they used to" applies, it's to films such as these that tackle important social issues while still delivering a damn entertaining story. Plus, the leading role is played by Charles Coburn, so you know they're doing something right. Sadly, but unsurprisingly, it's not available on DVD, but it will re-air on TCM July 11th.

The Big Dog House (Zion Myers and Jules White, 1930) - Okay, this is just insane. In the 17-minute The Big Dog House, dogs enact a story in which a department store worker is framed for murder by his boss, who has the hots for his girlfriend. They're dubbed by human actors (requiring them to move their mouths as though they were talking, resulting in jump cuts Godard could only dream of), they frequently walked (quite quickly) on their hind legs, and use their paws as people use their hands. Is it adorable? Okay, sure. It's also completely nuts. You can see this, and the other shorts in the Dogville series, through the fabulous Warner Archive program.

The Thomas Crown Affair (Norman Jewison, 1968) - There exists a great, fascinating subset of 1960s movies reaching forward to the slick, spritely-paced entertainments of the modern era; The Thomas Crown Affair is among them. Several times I found myself expecting a sudden burst of music, a certain edit, a specific camera move, only to be treated to something slightly different that keeps the film entertaining, but unexpectedly so. Worth watching for the evolution of film language, if nothing else (there is, it should be noted, a fair amount else). Available on DVD.

Midnight (Mitchell Leisen, 1939) - The classic screwball set-up, complete with mistaken identities, disguises, chasing the wrong man while falling for the right one, the bourgeoisie, the working class, and the law. Put it all in Paris, get Claudette Colbert, Don Ameche, Mary Astor, and John Barrymore in on a script by Billy Wilder and Charles Bracket...it's all just as much fun as it sounds. Available on DVD.

Angel Face (Otto Preminger, 1952) - Preminger's scenarios aren't as original or ceaselessly inventive as Hitchcock's, but the man can still craft a damn engaging suspense film. Here, Robert Mitchum is a little miscast as the chump in the classic film noir/femme fatale set-up; his character would benefit from an actor giving a little bit more. Furthermore, we start to lose track of the main characters when we need them the most, but there are some really effective, stirring moments, and Jean Simmons is really quite good at building layers of emotion into each scene. Available on DVD.
Posted by Scott Nye at 3:46 PM