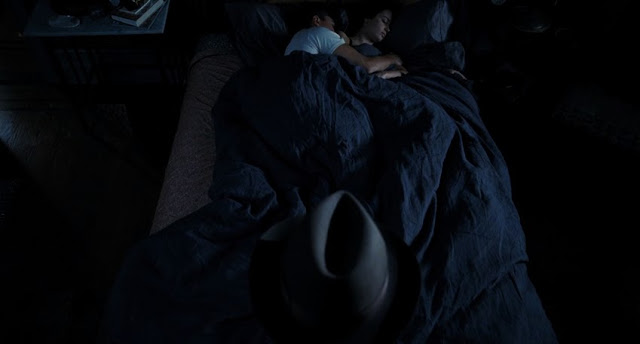 As my feelings towards this film are wrapped up in the ending, it's impossible to discuss the film at all without a big heavy spoiler alert front and center.

I'm not a guy who needs big stakes in his films (though I do need big steaks in my life, but that's a subject for another time). If you listen to a lot of Filmspotting, or even a little, you'll hear them talk time and time again about the importance of stakes in films, and from a certain perspective, it's hard to disagree - big stakes give a film a real drive. This is why the Coen Brothers often start their films at a point when most films are just getting to the second act. The stakes already seem insurmountable, and the fun becomes watching them become even more difficult. But the Coens are smart enough as writers to be able to pay off their massive stakes.

As a first-time director, George Nolfi has an assured visual style and and creates a great rapport for his stars (Matt Damon and Emily Blunt) but as a screenwriter he completely undercuts himself by the end. His premise, from a Philip K. Dick short story, is of politician David Norris (Damon) who suddenly discovers a world controlled by mysterious forces that guide our reality in small but significant ways. This affects him because they're trying to get him elected Senator, and eventually President. The problem is that in order to do so, they have to stop his romantic entanglement with Elise (Blunt), the only person who ever fulfilled the void in his life.

Nolfi's stakes are thus gigantic. This is obviously a story of fate vs. free will, but the consequences of each are more intriguing than the question itself. Nolfi never explores why it is so important to these higher forces (they're never referred to as "The Adjustment Bureau" in the film) for David to become President, but we do learn that for them to spend as much time as they do keeping David and Elise apart, it must be something pretty huge.

So if David follows the path chosen for him, he'll become President and probably do a great many things for the betterment of the country, but he'll never truly be happy. If he stays with Elise, he'll be happy but too content to aggressively pursue higher office, and the country will be worse for it. The first scenario is emphasized, but there are never any consequences put forth for him choosing Elise over politics, other than perhaps sacrificing some career benefits. This is the movie's first big failing - we know him becoming President is important, because it's important to the higher forces, but explaining why it's important would presumably be too morally ambiguous when David puts all his effort towards being with Elise.

But the biggest problem is that Nolfi doesn't pay off these stakes at all. Instead it's determined that because David worked so hard to be with Elise, he deserves to do whatever the hell he wants, even though it's been previously established that the only reason David can't be with Elise is that, when he does whatever the hell he wants, he won't end up becoming President. He'll just stay content in a well-paying career and accept no responsibility for this decision.

If you're confused, it's because Nolfi's conclusions works not on any logical or thematic level. The lesson at the end is that we deserve to do whatever we want to do if we want it bad enough, with no regard for the consequences of those decisions. I'm far more in the "free will" camp than the "fate" camp myself, but if you're setting up a world in which fate does play a very tangible role, a role designed primarily to keep humanity intact and potentially even improve it, then you have to explore the consequences of going against your fate.

This is made all the more frustrating because the movie's a pretty good watch up until it all falls apart. The stakes are enormous, which gives it great drive, and Nolfi has some solid Bourne-esque chase sequences (Nolfi had a hand in writing The Bourne Ultimatum), full of clever innovations and quick thinking. Damon and Blunt are terrific together, and quickly and easily sell the importance of their relationship. I did genuinely want them to be together, but unfortunately the film set up a reality in which there's more at stake than simply being happy.

Much as I get excited by any Hollywood film willing to tackle bigger questions than "do I cut the green wire or the red one?", I also expect it to deliver somewhat on those demands, and The Adjustment Bureau simply doesn't. At all.
Posted by Scott Nye at 9:11 AM

I doubt whether I'll bother seeing "The Adjustment Bureau", from what I've heard it's an inferior Inception story, for lack of a better description. And your review also gives it the thumbs down.