One thing I didn't get to in my review of Kino's DVD-only (and, it must be noted, outstanding) release of Fritz Lang's The Spiders (now posted at Battleship Pretension) is the rather odd phenomenon of seeing newly-minted, digital intertitles inserted into the film. This certainly does one the favor of translating the German intertitles to English without the use of pesky subtitles, but I wonder if the aesthetic interruption is actually greater than one for language.

Here, for example, is an early subtitle that demonstrates the default state of things (Kino changes their design to accommodate written notes as well, which is pretty sweet): 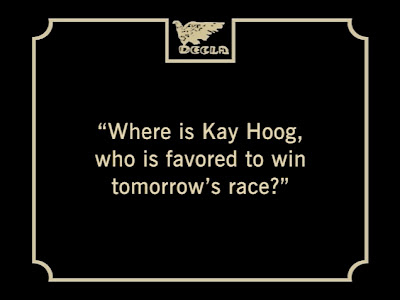 And here are three consecutive frames from that same scene, a social dinner engagement in which people speak only in exposition: 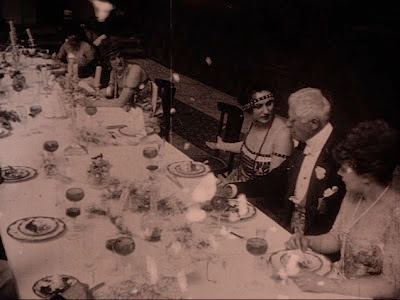 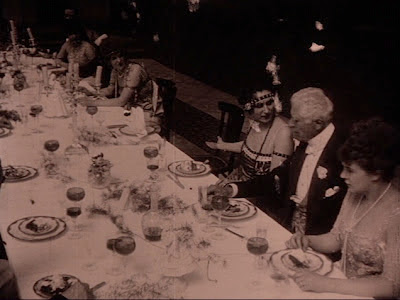 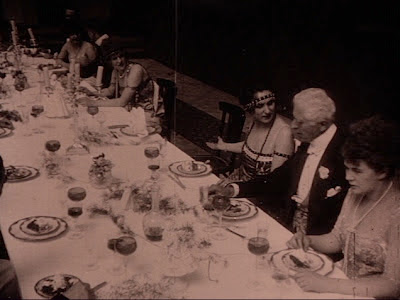 This is the best method I could conceive of to illustrate that this is not the most pristine print (this is actually one of the cleaner sections), which for the purposes of presenting the film, is in many ways appropriate considering it was made in 1919 (and, for those of us who love the medium, a real treat). But the image does flicker and flutter, damage marks fly across the screen, frames are missing, and it is in every way a very lived-in print. But it also sets up certain expectations of the viewing experience that are then gravely disrupted by Kino's choice to go with new digital intertitles.
It obviously doesn't totally wreck the whole affair, and the disc still gets a hearty recommendation, but it is a curious decision that I think could have benefitted from some elaboration. Perhaps the intertitles that accompanied the print (likely the only one in existence) were too damaged to even be read, or they were missing altogether. Maybe it is a larger, purposeful decision to honor legibility over consistency.
Anyway, I was quite high on the disc as a whole, which demonstrates how exceptional DVD still remains as a format, and for more on that, I would urge you onto Battleship Pretension.
Posted by Scott Nye at 4:16 PM