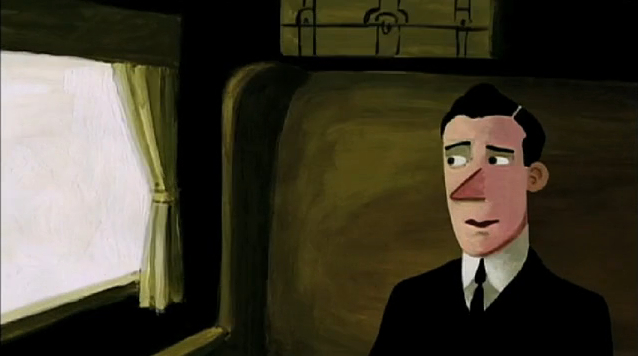 Shorts programs are always a bit of a mixed bag, which should be expected. Even in a selection as carefully curated as you'd hope the Oscar contenders would be, there are bound to be a few duds - after all, if you were to watch all nine Best Picture contenders, you'd probably come out wondering how a few got in there (and if you didn't, well...hey, to each their own I guess). But I'm more than happy to report that the crop this year is, on the whole, a very satisfying one.

As much as animated films are seen as the province of children, I actually found this year's selection far darker than the live-action division, which in turn was filled with stories of hope, redemption, and humor. Oh, sure, you have animated films such as Pixar's La Luna, about a young boy going on what appears to be his first fishing trip, but takes a whimsical turn towards celestial sanitation, and The Fantastic Flying Books of Mr. Morris Lessmore, a film about the power of the written word that relies on very little of it (even if it is a little satisfied with itself for doing so). La Luna in particular is extraordinary, and combined with its lighter subject matter and Pixar's reputation, it'd be hard to imagine it not taking the Oscar, and it'd be easy to say "oh, well, the Academy just likes their light, fluffy stuff" if the film wasn't in turn so damn great. It's a true big-screen experience as well, so those fortunate enough to see it in such an environment will be richly rewarded.

We'll get back to the animation, to end on a positive note, but on the live action end, looking over the list, I am once again struck by the considerable sameness of the batch. Pentecost and Time Freak are sort of two of a kind, taking rather irreverent and very funny looks at big topics - coming of age in a religious upbringing for the former, quantum physics for the latter, but have the incalculable benefit of being on the rather short side. It's not that I have places to be or whatever (although...), but most "shorts" running upwards of 30, 45 minutes tend to feel like abbreviated features, shortchanging the drama they're intent on introducing and making the most out of the few shooting locations their budgets would allow.

Of those films, we have three - Raju, The Shore, and Tuba Atlantic. The first two are unfortunately the most disposable of the bunch. Raju is the yearly "important topic concerning the third world" film, this time looking at orphanages that trade in kidnapped youth. That it manages to wring any drama from its subject is noteworthy, but once again, it's too short to really land except on a conceptual level, and in that case, a commercial for its cause would be equally effective. You get no sense of the protagonists as characters, so they stand in merely for stock types, and not a terribly endearing one - white people who simply must adopt a child from the third world. It is, however, much better than The Shore, a film about regret and redemption that decides to become a wacky chase comedy about three-quarters of the way through for little reason and deadly effect. It is what you fear when you enter any shorts program - taking much more time than any of the others, and wasting nearly all of it.

Tuba Atlantic is something else altogether. True, it relies on sort the sort of pat structure of a dying man going through the stages of grief while a young woman accompanies him (this is, for what it's worth, nearly the same set-up as an episode of Scrubs), but it's also completely bizarre. The dying man lives on the Norwegian shore, and is obsessed with destroying all the seagulls in his vicinity. Oh, and he also built a giant tuba with which he hopes to send messages to his brother living in America. So as predictable and dramatically flat as the film often is, y'know, the old man also pulls out a comically large weapon to mow down every damn bird he can see. So there's that.

Getting to the darkest of the bunch, we'll have to return to the animated division.

A Morning Stroll proved surprisingly cynical about our social trajectory, unfortunately relying on sentimentality for a bygone era and cheap jokes about the current one (it is, however, extraordinarily well-done on a technical level). Sunday and Wild Life are surprisingly downbeat, and the latter was perhaps my favorite of the bunch. It concerns an Englishman who, in the early 20th century, moves to Canada to become a rancher, more in love with the idea of the lifestyle than the fact of it. The former is about the titular day in a small town and its eventual suffocation of the young protagonist. Both use a purposefully rough, handcrafted style to evoke their rural settings, and have a very weird, bent sense of humor that I found at once intensely personal and incredibly pleasing.

The whole bunch play theatrically in over two hundred theaters in the U.S. and Canada starting today, and even if some are a bit of a slog, the ones that are great are so great, and short films are very much worth supporting. Get some.
Posted by Scott Nye at 9:44 AM