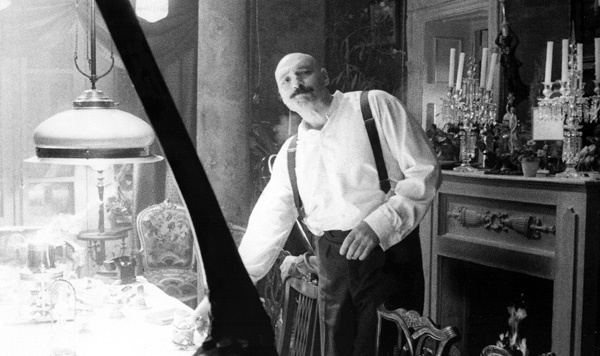 As of yet, I've been unable to find much substantial writing regarding Aleksei German's Khrustalyov, My Car!, which I saw at LACMA last Thursday and have found difficult to entirely dissociate from. And I wish I could, because, I'll be honest, while I understood the basic thrust of the story in a macro sense, I couldn't put two and two together for most of the running time. I've been assured by those who encouraged me to see it that this is not an unusual experience, so steeped is the film in references both literary and historical that one would need to be considerably well-read (and in Russian no less) to entirely grasp it.

If I were embarking on even a semi-serious consideration of the film (even a standard review), this would be no small cause for concern. But as I was there merely as an audience member and a cinephile, I have to say, I took enormous pleasure in appreciating its perhaps more superficial aspects. There are images enough to last a lifetime! A woman sensuously engaging in foreplay with the buttons of a coat, two really bizarre siblings that look like discarded Tim Burton creations, the disparate implications of roads in the opening and closing shots, repeated sequences in which people climb on top of walls only to fall over the other side (letting out yelps that recall the escalator to nowhere)...never mind the hulking, otherworldly presence of the protagonist with whom we're saddled. It's at times breathlessly funny without once letting up the pervasive nightmare it immediately conjures. The overall image of Russia is of a country in shambles, held together by little more than string, wire, nails embedded in rotting wood, ice, and the will of the few. It could as easily fall apart tomorrow as withstand another decade.

Khrustalyov, My Car! is, from a certain perspective, a ceaselessly entertaining film, so constantly does it bombard you with the weird, the absurd, the grotesque, and the inexplicable, frequently presented in gorgeous Bela-Tarr-esque long takes. In my review of The Turin Horse, I talked about how one of the pleasures of Tarr's cinema is just seeing how he'll get from point A to point B (and beyond) in a single take, almost always arriving at a composition that would put most other directors to shame. The thrills in Khrustalyov are not dissimilar, and, frankly, I can think of few better ways to spend two-and-a-half hours at the movies (certainly, one comes away a lot more enriched, and no less entertained, than the similarly-long The Avengers).
Posted by Scott Nye at 10:45 AM