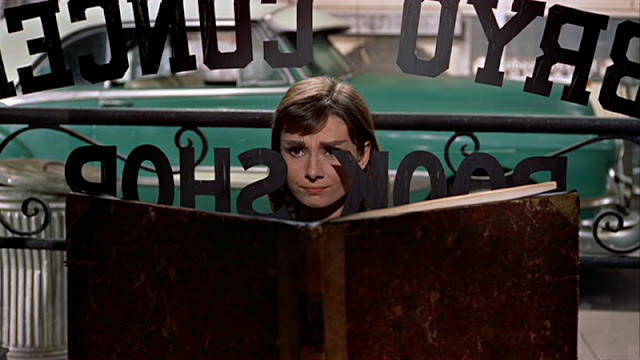 I've sort of been ducking and dodging discussing the relative "offensiveness" of various comedians (or comic news establishments, as the case may be) over the last few weeks, knowing essentially that there's an issue of context that is often overlooked, but not feeling enthused to the point that, frankly, it'd be worth the possibility that a minor miscommunication could derail the conversation. And I'm fragile. So, so fragile.

But I still think the basic idea is interesting, so it was a welcome surprise to find, while watching Stanley Donen's marvelous Funny Face for the first time last night, an avenue to explore how a piece (be it a stand-up routine, film, comic strip, awards show hosting, tweet, whatever) presents its world view, in spite of what it may be more obviously stating. In the film, bookworm Jo (Audrey Hepburn) is recruited to be a model for a fashion magazine by Dick Avery (Fred Astaire), the outfit's photographer. She has any number of moral and philosophical objections to the whole enterprise, but can't turn down a free trip to Paris, home of her favorite philosopher, Emile Flostre (Michel Auclair), whom she hopes to meet.

While Jo is delighted by the company she quickly discovers (mostly in a place referred to only as "the cafe"), Dick is less impressed, considering them largely to be easily-fooled phonies, not too different from the customer base with which he's more familiar. The parallel, not explicitly stated in the film, is a worthy one to draw, as it's not unusual for someone to take up intellectual pursuits as little more than a fashion statement, though, as someone who likes to think his interest in such matters extends beyond that, I will admit to getting a little touchy when Dick and the magazine's editor-in-chief, Maggie (Kay Thompson), infiltrate Flostre's home in the kind of bohemian disguises that one of the particularly square partners at Sterling Cooper Draper Pryce would imagine and proceed to mock even the appearance of honest expression.

Which, in turn, brings me around to the point. Funny Face is pretty relentless in its portrayal of the culture of intellectualism, but that's not our introduction to philosophical theory - that comes through Audrey Hepburn. Sure, by the end, she heads off into the wide world of modeling so that she and Dick can be together forever, but she doesn't abandon her interest in the fictional "empathicalism" movement, noting with joy in one climactic moment that Maggie finally understands it, cementing a slow-forming bond between the two. The ideas succeed, even when their champions fail, even in something as simple as making those ideas understood. The film is not, in my view, making fun of those who honestly pursue deeper issues, but those who reject one contemporary fashions for another, or who, in the case of Flostre, wield intellectualism as a cheap way to get some ladies.

This is a discussion that's probably been going on as long as someone has tried to speak one way while intoning something else (perhaps even the opposite), and I don't expect it to be settled here and now, but suffice to say that it's worth looking past any initial offense you may take, and consider the context in which something is being presented - what has been established, and what will come to be crafted.
Posted by Scott Nye at 12:18 PM

Do you wish on a regular development immediately? does one would adore a no-fax and cash advance chicago quick support day credit? this content gives the fruity and jolts in regards to however and wherever to urge it.