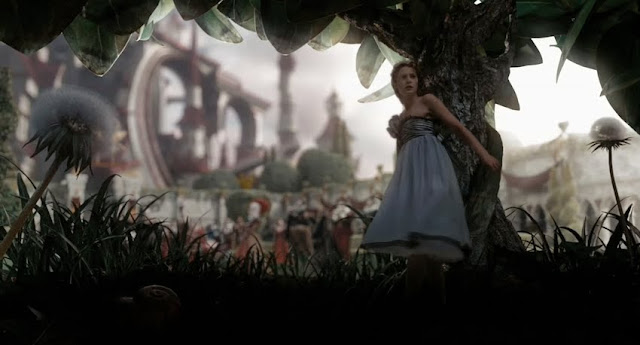 Note: After thorough consideration, I decided to see this in 2-D rather than 3-, as nearly every critic I pay attention to on a regular basis noted that the 3-D version was an unmotivated mess. Aside from missing a few teacups and the occasional hat being thrown at me, I didn't notice any way in which the film would have been improved by it.

In general, I tend to avoid movies I know will be bad. It's natural if you're working without a press pass and, even worse, an extraordinarily limited income. But, things being as they are, I'll find my way to one here or there, whether it be to follow a certain director who just happened upon a stinker, or, more often, to try to keep up on popular discourse. I know for a lot of people the latter is considered a pretty shallow reason, but I've rarely regretted it, even if I come out hating the movie.

And boy did I hate Alice in Wonderland. I went in expecting to, but was pleasantly surprised in the beginning that I really wasn't hating it at all. Sure, it relies on very tired shortcuts to building characters (in a movie taking place before 1940, all free-thinking women hate some sort of undergarment), and the dialogue is consistently hopeless (how many people can scold Alice for thinking about silly things?), but the first act is where really boring blockbusters thrive. Here is where you're taken in by the look of it before it becomes familiar, and I quite admire what Burton and cinematographer Dariusz Wolski did here - in lighting and camera movement, it looks and feels and awful lot like an honest-to-God Disney cartoon, albeit in live action.

The joy of this fades quickly. More after the jump.


Once the second act settles in, it's pretty clear screenwriter Linda Woolverton hadn't a clue what to do, and that any visual effort Burton and company had put in up to this point was pretty much where they were gonna call it a day. It would have been nice if Woolverton channeled her cluelessness into a series of surrealist adventures for Alice, but instead we're left with a series of mundane situations Alice is foisted into.

There are two issues here. First, I've never read the Lewis Carroll books, and I haven't a clue what his intentions for the story were and if those intentions are honored here. I just know that if I'm given the task of writing a movie in which the major threat is called the Jabberwocky and the wise man is a caterpillar who smokes a hookah, shit's gonna get a lot weirder than having Alice continually change size. 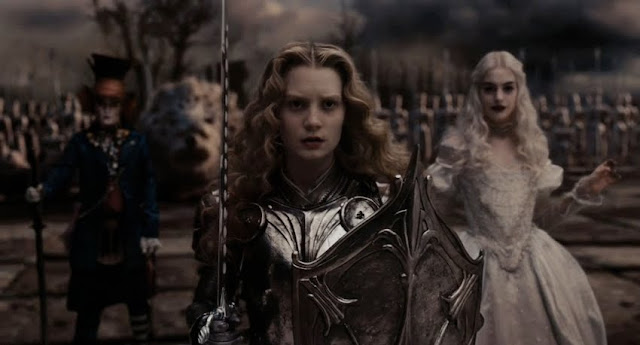 How does a movie of Alice in Wonderland become so hopelessly mundane and boring for so much of its running time? Apparently, anything can happen, and rather than have that actually be the case, the movie is intent on "creating a world" (if there's one thing I hate the Lord of the Rings trilogy for, and there's a lot, it's that it's required every fantasy movie to establish a level of realism most are ill-suited for), and establishing a story and quest that the film takes oh-so-seriously.

And second, wasn't Alice a forward-thinking feminist (before such a word existed) like...ten minutes ago? Because everything she does in Wonderland (I'm sorry...Underland...) is preordained and she more than happily goes along with it, including fulfilling the prophecy (which is more like something marked on the calendar) that she will slay the Jabberwocky and free the people of Underland (yes, it's another God damn hero's journey movie, just like every other blockbuster). Except it's not really clear, increasingly so with every second, why defeating the Jabberwocky suddenly means everyone will be free. I mean, the Queen has an entire army...sure, the Jabberwocky is nice to have around as a "hey, if you're not careful I'll call the Jabberwocky," but it doesn't seem like she's had to in some time. Maybe it's a metaphor for nuclear warfare. Probably not.

One could make the argument, regarding my complaint at the beginning of the last paragraph, that Alice repeatedly states that she believes this all to be a dream, so why would she take progressive action if it'll all be over when she wakes up? Well, there's another problem - Alice is injured several times and actually falls asleep not once, but twice. The movie establishes early on, as though it needed establishing, that pain indicates real life, and further, who falls asleep in a dream? If Alice is a fantastically unmotivated character (and boy, is she - she's simply led from place to place, never taking any true action on her own accord, and yet the film tries to tell us that this is some sort of strong female in a repressive world), she's also an astoundingly stupid one as well.

That said, she fits in well in a world in which the Mad Hatter, a character that wouldn't be worth discussing if the film didn't posit him as the sidekick (and oddly potential love interest) for Alice, is crazy when the film has time for him to be, and completely sane and reasonable when the film calls for it. And even when he is supposedly in "wacky mode," he's pretty tame. I mean, I understand not every crazy person is bouncing off the walls, but if he's earned the title of a "Mad" Hatter, then he's gotta be completely bonkers.

I'm tempted to dive into the ending here, because it's almost impossible to spoil a movie so thoroughly predictable, but suffice to say it's the most trite, perfunctory, and unconvincing denouement I've seen...possibly ever, I couldn't say for certain. What's worse is that, for as little thought as was put into this movie, far less could have been expended and made a far more rewarding surrealist adventure that didn't feel beholden to the three-act structure or the monomyth. 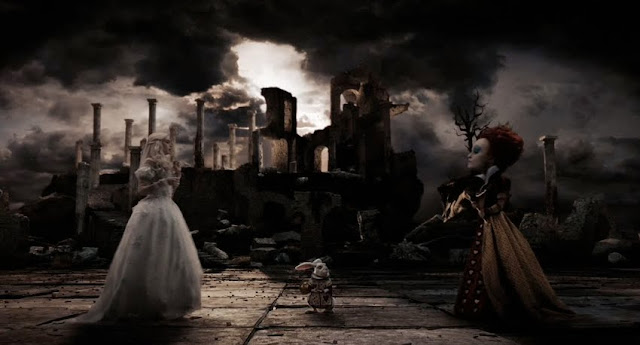 The off-kiltered Tim Burton version of Alice in Wonderland might frightened younger children, confuse older ones and bore the adults.

Scott - well said. I think I found things to enjoy where you did not, but at the same time this is not a great move. The oddball surrealism of the books is transformed into fantasy-adventure cliches with the trappings of a Narnian big-battle movie. Lots of interesting images to look at though - and I did enjoy Bonham Carter as the evil Queen. "I need a pig here." "I love my fat boys." Those parts made me laugh. Meanwhile, Johnny Depp went to such hyperbolic extents to be weird that he came off as unengagingly weird without any sort of consistency to his character.

I should have mentioned that I was pleasantly surprised by Bonham Carter (well, as surprised as one can be after watching her work for years) - I wish they didn't make her constantly say "off with their head!", but she was able to make even that kind of interesting.