Watch THIS Instantly: The Girl Can't Help It (Frank Tashlin, 1956)

Netflix Instant Watch is one of the greatest things to ever exist...ever. This is a series looking at some movies that are available through this fine service right now.


When they write the book on 3-D (or live-tweet it...however we'll digest history in the future), the question will inevitably rise - where were the artists? 3-D is the big thing in mainstream cinema right now, and yet the only movie I know of that I would say used 3-D artistically and thematically was Coraline. I hope there are others keen on the possibilities of the format, but so far, it feels like no one's really doing anything with it.

I say this because, within three years of its debut, anamorphic widescreen (known at the time as "CinemaScope," now commonly known as the reason movies still have black bars at the top and bottom on HDTVs) already had artists come through and do what still stands as some of the finest work in the format. Nicholas Ray and Douglas Sirk would go on to become the most renowned of all anamorphic artists of the mid-1950s, but after seeing The Girl Can't Help It, I'd say former animator Frank Tashlin gave them a run for their money.

The Girl Can't Help It is an explosive film of sex and crime, sure. But what really got me going was the celebration of color cinema when people really made use of it, and the early days of rock n' roll. While not as wild, free-wheeling, and slap-happy as, say, a Tashlin cartoon, it does carry much of the feel of a Looney Tunes cartoon, filled with great visual gags and manic performances. And what images...Tashlin's total engagement with CinemaScope, and just as importantly with the public excitement surrounding CinemaScope, makes the film a blast. Over fifty years later, few films have had fun with the frame like Tashlin did here.

And that color...Technicolor and CinemaScope are the two biggest arguments for the possibilities of 3-D as an artistic enterprise, because those were two complete gimmicks that were nevertheless used by forward-thinking artists. And so you get frames like these, the kind you rarely see at the movies anymore (thank you, Alain Resnais, for being one of the few), and wonder if you ever saw them then: 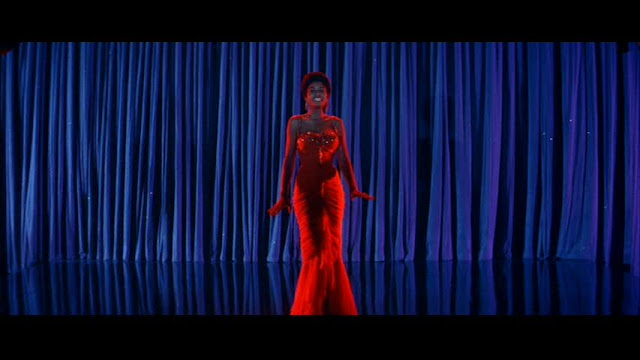 In cinema, ANYTHING is possible.

And the music...The Platters, Little Richard, Fats Domino, and too many others who have slipped away over time. The film was apparently supposed to be a satire of "those kids and their rock n' roll music," and while some of that does come through, we're mostly treated to a total celebration of the sound that was coming out of radios across the country in 1956.

Put simply, The Girl Can't Help It is a blast - electrifying, gorgeous, and totally silly.
Posted by Scott Nye at 1:42 PM