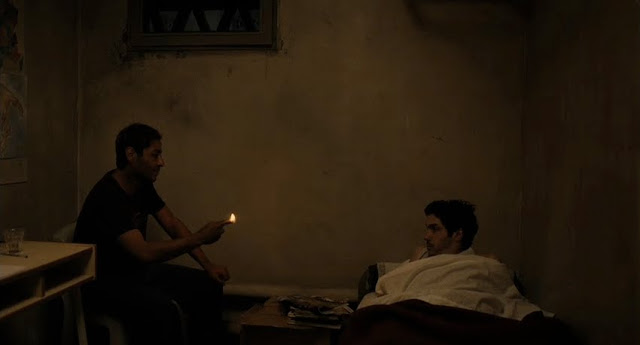 There are vague spoilers mentioned.

The first half-hour to forty-five minutes of A Prophet are about the most compelling and thrilling minutes I've spent in a movie theater all year. Following the process of initial incarceration, in which we see Malik El Djebena stripped, searched, cataloged, interviewed, dressed, and assigned a cell, Audiard distances himself (and us) from Malik in a way that allows us to experience this process for ourselves. Soon after, Malik is propositioned in the shower, which leads to an offer from prison mob boss César Luciani more approximating a command to kill a prisoner that presents a threat to César and his gang. If Malik does this, he will receive protection within the prison from the gang; if he doesn't, he will be killed.


The scenes that follow, in which Malik wrestles with, attempts to avoid, plans and practices for, and eventually carries out his first murder are stunning - gripping, insightful, first-rate filmmaking. We immediately understand how prison creates criminals as often as it rehabilitates them (Malik was put in jail for assaulting an officer; now, he's a murderer), and Audiard draws every ounce of tension from this situation and concept that is possible.

What follows is, unfortunately, unable to maintain this level of interest, and I'm at a loss when confronted with the praise this film has received thus far. It's not a bad film as such, but when put up against its accolades, I can only gaze, mystified. We never end up understanding Malik any further than we do at the beginning, and slowly all other indicators of an overarching point to the film fade away. If it's a look at the reality of prison life, why does it seem, beyond the initial section described above, that there are basically no guards at this prison? Or any authoritative figure? The occasional mention is given to paying off the guards, and Malik has to go through a board to get approval to take a day's leave, but it generally seems like the prisoners are allowed to do basically whatever they want, from roaming from cell to cell to beating each other, with only other prisoners to put a stop to it. Any complications posed by the prison's authority are totally glazed over or quickly disregarded, if presented at all.

Malik is punished, at one point, for failing to return from leave at the scheduled time, and is put in solitary for forty days - the film glazes over this section with a simple title card. We're given indications that Malik is subverting the gang structure and ambitiously aiming to be the top man at the prison, but at no point does he really struggle with how to accomplish this - he just does. And even so, the point of this - that prison can turn common thugs into career criminals - was established early on, never mind the oddly celebratory nature the film treats Malik's rise with (and yes, I understand that it's sometimes necessary to celebrate violence to put us in the head of the character, but Malik's actions are never treated with trepidation, uncertainty, or fear). There are moments that suggest Malik has some sort of power to see future events in his dreams, but the film isn't as weird as one would think given that.

Again, A Prophet isn't a failure on any real level - the initial section is truly astounding, and the filmmaking (that is, the actual construction of the film) is very assured, forceful stuff. The performances are good all around. The film just lacks grounding, cohesion, and an overall reason to be.

Americans don't like movies that don't end with weddings. Life is not like Hollywood. That movie was brilliant from start to finish, and was brave enough not to provide you with your formulaic rom-com ending. Cesar owned the guards. Audiard consulted widely with French Ex-cons. Or maybe you have some prison experience which would trump theirs?

No need to make assumptions, friend. You really don't know me that well. I mean, hell, you could've just gone back a few posts and found a glowing review of Broken Flowers. Moreso, I dismissed Alice in Wonderland for its formulaic nature.

And if you want to get to know me, one of my favorite movies is Persona, and that's about as soul-crushing an experience as one can have at the movies. Never mind the rest of Bergman's ouvre (he's one of my favorite directors). More recently, Synecodche, New York was my second-favorite film of 2008, and that's as unforumulaic and brave as they come.

It's totally possible the movie is actually very realistic, well-researched, etc. I would just expect more conflict with prison authority, or any authority, really. But as I mentioned, I have other qualms with the film. I'm glad you liked it, but in the future, feel free to keep the discussion about the movie, not me.

This was a GREAT movie - I LOVED it -whoever said your momma can't take violence:)! This and 'White Ribbon'
were the best movies I have seen in a long time - Great Depth, Dialogue, and Diversion from Hollywood -
Three terrific D's of any movie..or life!

Don't know how I would have ever signed in as my sister ... only I could have done it!:)))