Fifty Years Ago, When Art Was Cool...

A lot has been made about this year being the fiftieth anniversary of Psycho and Jean-Luc Godard’s Breathless, especially with the latter embarking on a cross-country tour, courtesy of a newly-struck 35mm print. But two other incredibly important, immeasurably influential films are also celebrating their golden anniversaries – Michelangelo Antonioni’s L’Avventura and Frederico Fellini’s La Dolce Vita. And what all of this has stirred in me is not a sort of wistful yearning for movies of this caliber to be made today, nor a desire to trace the many, many ways these four films changed cinema (though I won’t be considering Psycho for this), but rather a simple question – what happened to all the cool art films?

After all, art took off in the 1960s in a major way for a lot of reasons, but one of the less-discussed, far more “base” reasons, but I would argue incredibly important reasons is that even the stuff proclaiming itself as art was just flat-out cool in a way nothing coming out of art house cinema today is.

Breathless, for all its innovation and artfulness, is a jazzy riff on Hollywood gangster films that’s a load of fun to watch, and I’m so glad Rialto is focusing on this aspect for their ad campaign. Featuring the coolest of the cool, Jean-Paul Belmondo (who defines in his own special way the “men want to be him, women want to be with him” paradigm), Breathless is set amongst a community of semi-employed intellectuals, the kind of crowd us hipsters ache to be and who must have even made its contemporary beat generation jealous. 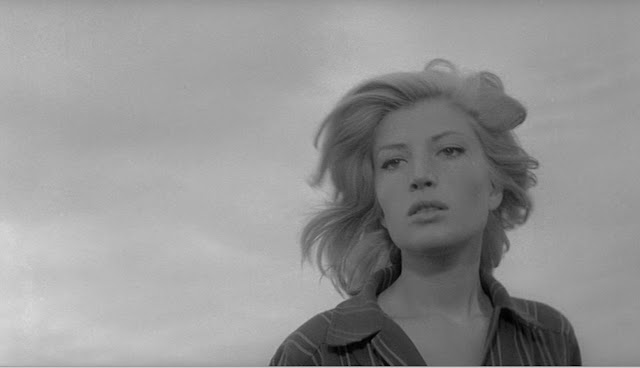 Meanwhile, Antonioni meditated on alienation and loneliness, but he did so with the stunningly beautiful Monica Vitti, the Italian countryside, and black-and-white photography that is still so far beyond anything that came before or since. And Fellini? His image of Rome is still the one in the cultural consciousness, and his own meditation on isolation was done against the backdrop of Roman nightlife – whereas Claudia’s environment matched her emotional state, Marcello stands in stark opposition to his. A journalist specializing in gossip, Marcello’s natural habitat is wherever the party is, or sometimes, in quiet moments, just down the street.

Is there any wonder people were drawn to these films? One need only see a few frames from any of them to be hypnotized. The imagery they crafted was meant to stand the test of time; to be instantly alluring and, it seems, consciously iconic. You couldn't dispose of these pictures if you tried. They work by drawing us in with a simple image of someone you would want to be – the aloof gangster, the disaffected society girl, the man about town – then subtly undermining and eventually exposing it bare.

It’s also a tradition that died with its era. Fashion magazines and travel agencies have adopted many of the modes these films birthed, but there’s no question that foreign films have just become a lot less cool over time, not just in how they're received but in how they're made. Those that received the highest praise over the last few years include 4 Months, 3 Weeks, and Two Days, and intense drama about abortion, and Cache, a meditative thriller about a man coming to terms with his violent past. Naturally, there should be room for these sorts of films, but on thinking about where art house cinema was fifty years ago, it’s not hard to see why the audiences just aren't there anymore.
Posted by Scott Nye at 3:13 PM

When you mentioned in an earlier post, your A Team 'review,' your disillusionment over the death of action movies, I wanted to respond and ask you why your view was so American centric, but I thought no, maybe he doesn't like Prachya Pinkaew, Johnnie To, Tsui Hark, or Benny Chan. With this latest post however I think that you're not so much American centric so much as woefully undereducated. Which is of course a growing tradition in America, so maybe both interpretations are accurate.

I don't know what you mean when you say "Those that received the highest praise over the last few years" and mentioned 4 Months and Cache, I don't know because you don't source this reference. Do you mean you and your group of friends? To whom do these films represent the zenith of art films in recent years?

For example, Film Comment, in their January/February 2010 issue, list Jia Zhangke, Apichatpong Weerasethakul, Claire Denis, Gus Van Sant, and the brothers Dardenne as their top five favorite working directors. It's convenient for me that the top five are all obviously art film directors and go along with my point here, but in the interest of full disclosure I'll tell you that Clint Eastwood is sixth.

I use the Film Comment list so that we may refer to something tangible and reputable, but my point is not to contrast your list with theirs, or their point of view with your point of view. My point is that your film observations are offensively reductive and limited in perceptiveness.

Because in my opinion the Film Comment list isn't even the best, and probably not the coolest. Those lists are achieved by panel voting, and you know how the accuracy of those can be. How about the insane coolness of Wong Kar-Wai? He's certainly entered the pantheon of cool directors, and should you be distracted by his latest American film, let's not forget the filmic blunders of Godard, Fellini, and Antonioni too. How fucking cool was Lee Kang-sheng's Help Me, God of Love? Cooler, if less meaningful, than the cool films of Tsai Ming-liang. Not to mention the South Koreans, who continue to elevate the cinematic standards of contemporary genre films, or Audiard's A Prophet, which was every bit as measured and confident as a film by Melville, Becker, or Dassin.

And really I could go on. I think you probably sense that I could go on, and maybe even in your head you are now thinking of some pretty cool directors, even more American ones, but anyway my point is that you seek to blame the films, but the culprits are the audience (I include you in this - how could I not), the distributors, social and cultural ennui, and a shifting priorities.

Thanks for the thoughts; to be sure, this wasn't one of my more considered posts, and Scott Nye regrets the error.

However, I don't think there's a lot of cool to be found in Weerasethakul, Van Sant, or the Dardennes (I still need to dive into Denis and Zhangke).

And I reviewed A Prophet, and found it a bit lacking. Maybe that invalidates my taste, but it's just one of those rare instances where I can't get onboard with the bandwagon.

You absolutely called me on Wong Kar-Wai, though. I absolutely regret the error on that.

I hope you'll stick around, however - I'm not the best when it comes to keeping up with foreign stuff, but I try like hell.