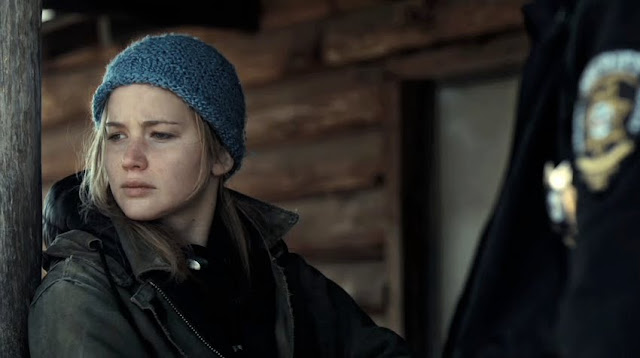 After seeing Nash Edgerton's really tremendous film The Square earlier this year, I was once again reminded how rewarding modern film noir can be when one invests more in its themes than simply its stylistic tendencies. Lord knows that in watching the classics, we revel in the clever dialogue and stunning cinematography, but rarely does that alone create a satisfying result, and engaging on such a superficial level in a modern noir will feel shallow, hackneyed, and worst of all, stale.

This, disappointingly enough, is the case with Winter's Bone, which begins with a promising set-up that's way too overstuffed and simply grinds on from there. Jennifer Lawrence stars as Ree, a seventeen-year-old girl whose father has disappeared and mother is what we might charitably describe as "ill," leaving her to raise her younger brother and sister. When the law rolls through to tell her that Dad put up the family house as bond before skipping his court date and disappearing, Ree jumps right in and decides to track him down herself.

What follows is a series of increasingly messy encounters with what allegedly passes for humanity in the Ozarks. Winter's Bone subscribes to the philosophy that the more grim, gritty, and gristly the tale, the more compelling it will be for its audience. While those are three words too often invoked as qualitative measures, Winter's Bone exposes such shorthands for what they actually are - observations. In truth, it's a fairly one-note movie, with neither the fun of Brick or the consistently surprising, engaging narratives of Memento or The Square (to name some recent successes at reviving noir). Aside from Ree and her uncle Teardrop (John Hawks), the characters possess neither motivation nor entertainment value; they're hollow trees with which Granik constructs her house.

The film's best moments are either small, as when Ree teaches her siblings to shoot, or incidental, as Granik has created a very convincing portrait of this section of the South. Those aspects ring true, but they are too few and far between, or merely incidental in a film that is centrally concerned with artificially creating, and then almost randomly dispensing with, conflict. In crafting a crime drama, one needn't be original, but one must be compelling. Winter's Bone, sadly, is neither.
Posted by Scott Nye at 2:39 PM

I'm looking forward to The Square.

Wow. I had a higher opinion of Winter;s Bone but I see your point. The film did drag at certain times. Now that you bring up Brick, I see what the film could have been but wasn't. Nice Review.

I was wondering if you accept guest post for your blog. If you do, I would like to submit a few. You can see a sample of my work at LaptopComputers.org under the author James Mowery. I've also written for several high-profile blogs like Mashable, Performancing, and CMSWire. Thank you for your time.