I saw three movies at the theater last weekend that are...of little consequence. As such, writing a full review of any of them would be stretching at least MY interest. Possibly yours. Who knows? But a paragraph or two? That seems juuuuuust right. 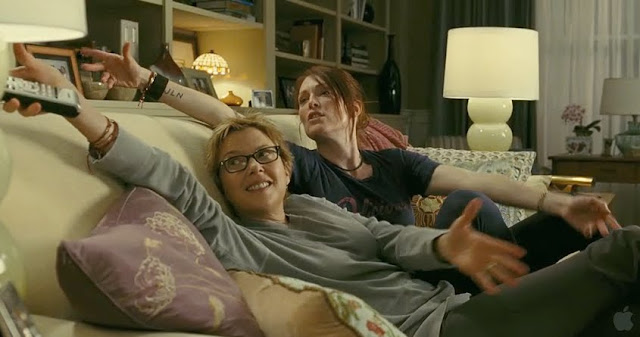 The Kids Are All Right (dir. Lisa Cholodenko) - Well, the good news is, it's not nearly the abortion the trailer made it out to be. In fact, it's actually quite a good film. Annette Bening, Julianne Moore...hell, everyone is uniformly excellent. Turns out Mia Wasikowska CAN act, not that we'd know it after Alice in Wonderland, and quite splendidly - the last shot of her will go down as one of my favorite moments from this year. It is a very convincing, real-feeling portrait of marriage (I'm twenty-four and unmarried, so I only know so much here), and deals with the conflict between people who live together very well.

At the risk of playing the part of "white guy who decides to take offense for other people," though, I thought the film's treatment of an ethnic character was deplorable. What was briefly, and refreshingly, taken seriously was tossed aside for laughs. And, vague spoilers here, Mark Ruffalo's character really gets the shaft for no good reason, aside from being the film's only disposable character. Overall though, solid little drama. 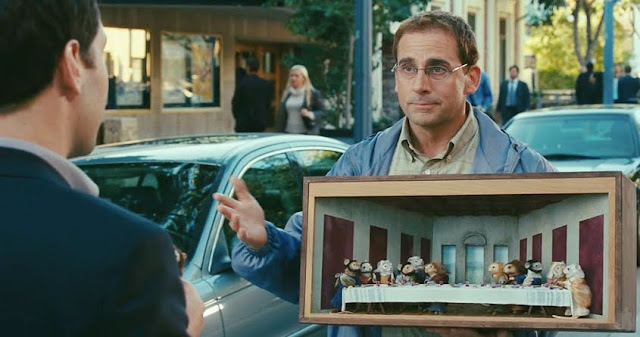 Here we see Steve Carell, half-heartedly trying to sell you on the idea that this is a good movie.

Dinner for Schmucks (dir. Jay Roach) - If you've seen the trailer, you may suspect that the film is trying to have it both ways, encouraging you to laugh at dumb people, and then putting you on their side and standing in righteous indignation of...people who laugh at dumb people. Well, you'd be right. I guess the redeeming characteristic is that we're not laughing to their face? No, sorry, doesn't fly. I'm all for laughing at idiocy - and I did, frequently, during this film - but you can't expect me to suddenly take their plight seriously. Doesn't work.

And I am done, done, done with comedies that rely on situations that really are "just a big misunderstanding!" If Three's Company is on in the background, it's fine, but there is nothing more infuriating than watching a conflict play out that could be completely dismissed with a sentence. Maybe two. What you're telling me when you do that, movie, is that you don't have what it takes to make your character actually do anything wrong, but still want the comedic/dramatic benefits of someone who does. Like I said, funny movie, but not terribly good. 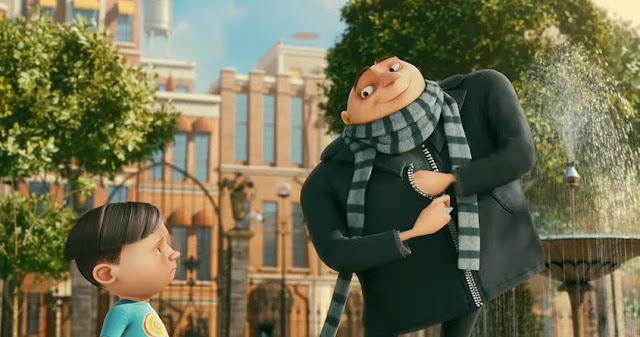 Kids, lesson number one is, if a stranger suddenly reaches into his coat, don't keep standing there. Just run. It's over.

Despicable Me (dir. Pierre Coffin & Chris Renaud) - You know...people complained that Iron Man 2 was just a long commercial as though that was something new. Despicable Me is only a film insofar as it's character interacting in a motion picture show over an hour and a half. It's really just pure product. Imagine the most disposable kid's movie you can...okay, this isn't totally fair. This is not completely disposable. It doesn't, say, actively decompose or anything. This metaphor is going nowhere...the point is, there's nothing at all interesting about this film. Nothing unexpected. No delightful surprises. No real bad points either. It just sort of plays.

The one thing that is kind of awful is the 3-D, which I know is "same old, same old" for most of ya'll, but dammit, as someone who knows in his heart of hearts that 3-D is the most exciting artistic possibility to hit cinema since CGI, I am just depressed when it's used this shoddily. Especially since it gives the depth-haters some ammo. There are some fun moments with it, and there are some jokes with it during the end credits that are irresistible, but during most of the film, the depth of field kept changing for no readily apparent reason. Characters or objects that were in front of the "line of scrimmage" (or the proscenium arch for the drama nerds) would suddenly fall behind it, and vice versa. Just sloppy.

So yeah, that was last weekend. This weekend's a whole bucket of nothing, though one of these days I've got to get around to seeing Salt, but really, I've got no reason to be at the movies 'til the 13th, for Scott Pilgrim vs. The World, The Expendables, and the catch up on The Other Guys. I'll keep this blog a-rolling with plenty of talk on older movies though. Promise.
Posted by Scott Nye at 8:38 PM

Mia is a great actress! She was actually one of the reasons I was excited for Alice. However misguided that excitement was, the truth is that she was phenomenal in the first season of HBO's In Treatment, which is a great show that I highly recommend.

This comment though is mostly to encourage you, cause your writing and your thoughts on film kicks ass.

Thank you, sir; much appreciated.

I keep hearing good things, not just about her on In Treatment, but the show in general. Some days I wish we still had only three channels - there's way too much good TV that I haven't seen.

Well said about Despicable Me it "just sort of plays." That's exactly how I felt. The movie played and I felt on the outside most of the time - touching moment with the bedtime story though. The little yellow dudes were sometimes amusing but ultimately a pain. Other than that - it's a plot that keeps being redone in computer-animated kids movies: superhero/villain vs. superhero/villain. There's another one coming up.

Yeah, I will admit the bedtime story - the one he was forced to read, more so - absolutely worked, but I wonder if that's not simply a bit of nostalgia at play (even better that it's a sort of universal nostalgia).

I am so very uncertain about Megamind...I sort of liked the trailer as a twist the Superman/Lois Lane/Lex Luthor (with a trace of Brainiac) set-up, but it really didn't play beyond that. I also wonder if the trend of making the supervillains into the good guys really makes a whole lot of sense for a kids' movie (I loved Toy Story 3 in part because it celebrated heroism)

I read somewhere that the directors of Despicable Me made the film about the villain because there are so many movies - even kids' movies - where the villain is just much more fun and interesting than the hero. As a personal example, when I was younger I loved Dr. Evil but could give or take Austin Powers. And since even heroes are supposed to have flaws and an arc, does it ultimately matter whether their starting point is to save the day or steal the moon? Plus, I think kids have a bit of anarchy in them that responds to the antihero behavior - just look at Looney Tunes.

I thought of Looney Tunes, but we're rarely - if ever - on the side of a villain there. For all of the sociopathic behavior Bugs or Daffy engage in, it's either a response as a victim (Bugs is being hunted) or it's the same set-up as Dinner for Schmucks, where we laugh at everything Daffy does to ruin Porky's life.

In the end, funny is funny, so if Despicable Me were an amusing movie, that'd be fine, but it's not like Gru returns the moon out of good will.