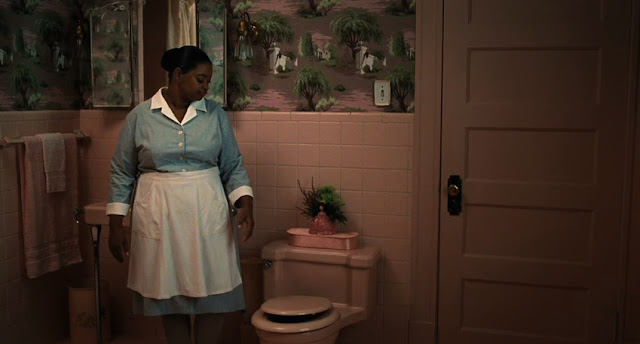 There has, unsurprisingly, been a lot of discussion surrounding The Help since its release. Movies about race tend to do that. There have been the usual claims that it's another movie about whitey saving the black folk (although the film makes great pains to not come across that way, and I really don't think it does). There have been issues of representation - are the black people too saintly or just saintly enough? And perhaps more importantly, there's been debate about whether making a comedy about mid-century race relations in Mississippi is a good idea at all.

All that is sort of besides the point to me. My big beef with the film - along with several smaller beefs - is that it doesn't give racism its due.

Now let me explain. Racists be crazy, we know that. But there has long existed a strand of institutionalized racism in this country, and when people use that term "institutionalized racism" they're not talking about the institution like the government's an institution. It's not as though someone laid down the law and all the white people kind of sit around saying "I know, this segregation's a bitch, but what'll you do?" It was an institution because nearly everyone was onboard with it. Undoubtedly there were some people who bowed to public pressure because they're trying to keep up appearances or wanted to fit in or hey life's hard enough as it is without doing the whole changing the world thing and sometimes you just want a decent meal and to keep the electricity on. But for the most part? That was an ugly scene, man. But The Help would have you believe that NO ONE in Jackson, Mississippi in the early 1960s was totally down with the whole racism thing except for ONE PERSON, Hilly Holbrook (Bryce Dallas Howard, playing somewhere in the key of Timothy Dalton in Hot Fuzz), who must have some sort of unimaginable power over the residents because she's managed to convince all of them to go along with this whole racism idea of hers. All except that damn feminist! 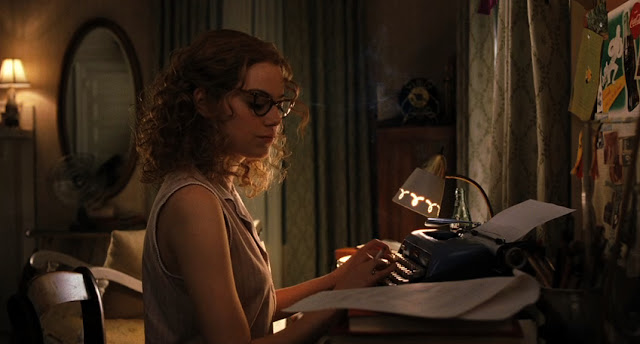 The story nominally centers around Skeeter (Emma Stone), a recent college grad who just landed a job as a journalist, in her quest to give voice to the long-suffering maids of Jackson, though she doesn't really have much of a story here herself. Her purpose is purely political - she's there to convince us we'd be just like that if we lived back then, and to assure the viewer that the filmmakers don't believe these racist things the characters are saying, because look here's this nice independent liberal woman who agrees with 2011 sensibilities and rolls her eyes at all this other silliness. Dramatically, her role is as the vehicle in which we travel to visit the maids - chiefly Aibileen (Viola Davis) and Minny (Octavia Spencer) - or the racists, or all the nice people who just can't wait for Skeeter to get the word out that black people are people too so that they can finally come out and say the same thing. It's as though, by the end, everyone suddenly woke up and said, "my goodness, the 1960s are here!"

There are other more objective, dramatic issues with the film. For instance, just to make sure Hilly isn't the only one we'll have, we're given Minny's abusive husband, who exists entirely offscreen, lest he take on the qualities of, y'know, a person. That'd be complicated. Then there's an extended, frequently referred to bit of quite literal bathroom humor that, were it a part of a Farrelly brothers film (and it would not be out of place), would earn derision from the very crowd who here celebrated it. But perhaps that's speculation on my part. Maybe what I meant to say is that it wasn't funny the first time, nor the nineteenth time the movie makes a joke about the same freaking incident. Don't these people have anything more important to talk about? There's also the scene in which Skeeter completely rips into her date, who despite being a bit of an ass, probably at least deserved the consideration of a conversation. And I'd appreciate this bit as a nice little character flaw on Skeeter's part - maybe she's a bit of a hothead? - if the film didn't leave a beat for the audience to cheer.

On the whole, the Tate Taylor's direction is an abomination that would make Stanley Kramer rise from the dead to join Paul Haggis in saying, "miiiiight wanna hold back a little there." Every opportunity for subtlety is completely glossed over - Hilly is absolute evil and Skeeter is absolute good. Pure and simple, and even the slightest suggestion otherwise would totally undermine what we're going for here, which is the oh-so-daring message that racism is bad. At least Kramer and Haggis had the guts to tackle the subject in their own time, and with characters that had some semblance of dimension. Taylor's direction is flat and uncompelling, barely a step above Judd Apatow aesthetically and near the bottom of the barrel emotionally. I know there are those out there for whom this created a grand emotional swell, but I simply can't get that worked up when the film can't give me an actual person to root for or against while actively denying the very real stakes that would have been present in this setting. It's no great victory defeating the concept of racism when that entire struggle is waged against a single person. 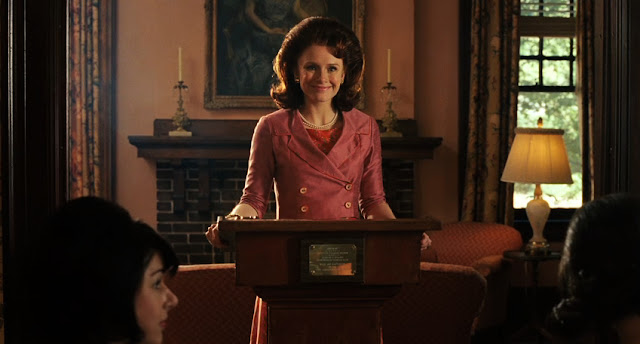 I swear the movie would have you believe Hilly invented racism, and as of 1960, was its sole proponent, so if we can just do away with her this whole misunderstanding would clear right up! Even her ancient mother (Sissy Spacek), who probably knew people who fought for the Confederacy, just adores the maids in that homespun racist sort of way (and the film urges us to laugh along with, and celebrate, a character who not too long ago had Minny fanning her with a newspaper, with absolutely no sense of irony about the whole thing). In one scene, one of Hilly's friends even tries to speak up on her own maid's behalf, and Hilly just keeps shutting her down like an abusive husband.

I don't have a problem with light, frilly entertainment, but I do think it's immoral and irresponsible to present something so complex, volatile, and still relevant so simply. The film's treatment of racism is too pat for a force that continues to drive at the way this country operates. It's a nice enough way to introduce a 7-year-old to the concept, I suppose, but no adult should accept the ideological undertones of the film. Sure, it makes mention of the KKK and of other people, somewhere over there, committing horrible acts based solely on the color of a person's skin, but the people in your neighborhood, the ones you go to church with? Oh, they'd never do that. Look at how nice they are! They might be a little curt, but that's only because life's stressful sometimes and they are so very Southern. But give them time, talk reasonably to them, and they'll understand. The film doesn't quite end on a note of "and none of that was ever a problem again!" but it seems to suggest it's only a few years down the line (just as soon as Mighty Liberal Skeeter puts a stake through Hilly's heart...or something).
Posted by Scott Nye at 10:02 PM

Great, great, great review. This film (and the book) has no idea how racism really works, how it's so culturally bred that good people can be and often are racist. I grew up and still live in the South. My whole family is racist. I have friends who are liberal to the point of democratic socialism who still get uncomfortable at the thought of blacks and whites intermarrying. The book at least offers less redemptive characters, but it still clearly shunts racism into Hilly's Maleficent act. Racism doesn't have a face, and this film gives it one just to defeat it more easily.

I was open-mouthed at some of Taylor's decisions. His softening of Skeeter's mother robs the work of its only moment of quasi-insight into just how deep racism ran—in the book, she is completely remorseless about firing Constantine and cannot understand why Skeeter is upset. In the film she's wracked with guilt and we're made to feel sorry for her for being goaded into racism she totally doesn't feel despite her being fine with underpaying a black woman to basically do all of her responsibilities save sleep with her husband.

Speaking of Constantine, how awful was it to see Cicely Tyson reduced to some toothless spirit of the garden, completely abstracted into a woman who could not imagine serving white people? That shot of her pawing at the door as if an abandoned dog made me almost physically ill. Both Taylor and Stockett had maids growing up, and it appears to have barely occurred to either of them that their maids actually just viewed them as jobs, and grueling jobs at that. There was an interview Stockett gave where she noted that some maids she interviewed while writing the book were forthright about their unromantic views of raising someone else's kids, but Stockett places that totally aside for Constantine and Aibileen. I found it telling that Minny wasn't given a white kid to take care of. It might be a shock to the white people who are this film's audience to see her completely unconcerned with some stranger's snotty baby.

Jake - Thanks for the kind words and the further insight. I've yet to spend much time in the South (for lack of money more than effort, I assure you), so I'm always careful to judge such matters, but...yeesh. It is fascinating (and kind of terrifying) how thoroughly that sort of thinking can get ingrained.

I'm not terribly surprised to learn the book is more complex, but I even thought the screenplay could have been directed with more nuance. Every opportunity for subtlety - Skeeter lashing out against her date's totally normal attitude (for the time) was certainly one example - was sanded down by Taylor's direction.

I wanted to talk about Skeeter's mom in my review, but couldn't find a good place for it. She basically gets the same treatment as Spacek's character - we're to be appalled by her behavior one second, up until the point where she's exhibited too many likeable qualities to keep her racist views intact.

That bit with Constantine (and indeed the treatment of her in general) bothered me as well for reasons I couldn't identify, but you and others likening her to an abandoned dog is dead on. It's as if her entire reason for being was to serve white people, and she couldn't even identify basic, prevalent social attitudes when she saw them. I didn't totally hate the introduction of her via Skeeter's memory, as a lot of that scene played like the way she remembered it more than the way it actually was (though I'm not sure the Taylor knew the difference), but that scene in which she was fired was just...awful. On so many levels.

Business day money developments, on mentioned as bourgeois day money developments and account assets breakdown, offer businesses cash reciprocally payday loans mobile for a cut of future mastercard sales, per Business Finance. Business cash money lenders stress that this may in all probability presumptively somewhat be not a money loan as a results of the patron "purchases" the money with an organization quality.