Traveling Through Time and Space From Beverly Hills 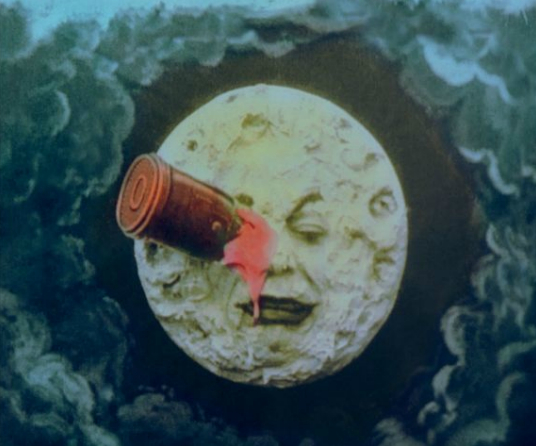 Martin Scorsese and Thelma Schoonmaker are fond of saying that the further you look back at cinema, the more you realize that everything you're attempting has already been done. And if you'd never found convincing evidence of this, one could hardly do better than "A Trip to the Moon, And Other Travels Through Time, Color, and Space," an event that took place last Tuesday evening at the Academy of Motion Pictures Arts and Sciences.
After all, they had 3D back then.
The program was hosted by Serge Bromberg, a French cinephile whose business it is to find as many rare films from the silent era as possible and restore them to their best. Not bad work if you can get it. Bromberg made for a tremendous host - not the most comfortable in front of crowds, but full of information, and more importantly, out of his mind excited to show us what he had. Even more surprising was that he played live accompaniment on the piano for all the films that required it. So yes, he was easily the classiest guy in the room.
Let me get this out of the way - I have now seen six 3D films from the 1900s. Three, from 1900, were very short - under 10 seconds - and were not originally exhibited theatrically, but rather through a sort of personal viewing device (I wish Bromberg had explained this a little further, as it was a little unclear, but apparently watching movies on a tiny screen isn't such a modern development either). One showed people strolling about a train station, another featured a young woman being awakened in the morning, and the final one...well, frankly, it looked like the beginning of an orgy. It only lasted about four seconds, but a man was approaching a bed from which two sets of women's legs could be seen kicking about, so you tell me.
The second set weren't 3D films precisely, but they did reveal that the same production techniques were used to conquer piracy even then (if not exactly the same sort of piracy).
See, Georges Melies made almost no money off of "A Trip to the Moon," even though nearly everyone saw it (the Avatar of its day, Bromberg said more than once). That's because nearly everyone who exhibited it was showing a duped version, or even a dupe of a dupe (of a dupe and so forth). Demand was too high to wait for Melies to make copies in France, and hey, it was cheaper that way. After that, he made his shorts by filming on two cameras simultaneously, and sending one print immediately to the United States while keeping another in France. But in doing so he also created the exact elements needed for stereoscopic 3D. So Bromberg and his team simply combined them digitally, and showed them to us in the now-common digital system.
Something, huh?
And no, for you purists out there, the 3D then wasn't remarkably better than live-action 3D now. It still has the same problem of appearing more as a series of layers, and not keeping up with movement very well (especially in the days of hand-cranked cameras). But it was pretty amazing to see 3D films from the turn of the century (and kind of weird to see a 3D film with damage marks).
Beyond that? I saw the saga of a caterpillar turning into a butterfly, a totally indescribable animated short, a butterfly hunter besieged by his targets, only to end up under their study, a very racist (but incredibly amusing) optical trick to create the illusion of gymnastics, and an acrobatic fly (to describe "The Acrobatic Fly" any further would be nearly impossible, and unconvincing - it really had to be seen to be comprehended, much less believed, so I've embedded it below). I saw a short in which a man seduces a woman on a train (which contained probably the best use of dissolve to show the passage of time this side of Buster Keaton's car traveling to the other side of town in Seven Chances), something of a peep show in which a woman gets nearly nude for a bath, and an actor (badly) pantomime opera. India came to life in glorious hand-tinted color.


Many of them, in fact, were in hand-tinted color (the process of which entailed a group of people - typically women - going in and painting individual frames of film by hand). The process obviously fell by the wayside with the advent of Technicolor (and Eastmancolor and all the rest), but the result is a totally unique view of the world.
The one I really want to call attention to is "A Trip Down Market Street," which was the first up and might have actually been my favorite of the evening. In San Francisco in April of 1906, two filmmakers were assigned to record a boxing match, which ended roughly twenty rounds before a typical match would. Instead of just bringing the extra film back, they hopped aboard a trolley, and filmed life as it passed in front of them. The film is essential several long, rarely broken tracking shots down a major city road at the turn of the century, and it was unbelievable. Admittedly, I'm fascinated by any documentary whose mission it is to simply show life as it happens, but who wouldn't want a window into city life then? Who wouldn't want to see cars interact with horse-drawn carriages and trollies and pedestrians (free from crosswalks, I might add) and bicycles? If rules of the road existed then, I'd need someone to explain them to me - people drove on the right side of the road, but that was about it. The print of the film was a wonder, and seeing it on the big screen (the screen at the Samuel Goldwyn theater is massive) was revelatory.
A lot was made of the fact that the film was shot no more than five days before the 1906 earthquake (a historian determined this by tracing the license plates on the cars, which were registered as late as March, 1906, then studying weather patterns to account for the puddles on the ground), which is certainly of interest, but this could have been shot five years before the quake or fifteen years after and it would be no less gripping. 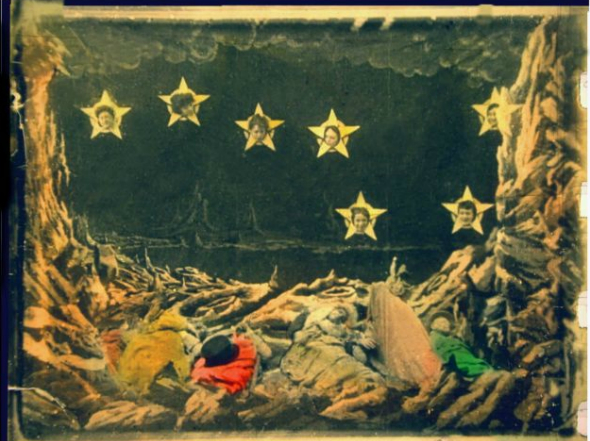 The main event was, of course, the unveiling of "A Trip to the Moon" in color. We didn't quite make the North American premiere (that honor went to Telluride mere days prior), and certainly not the world premiere (it opened the Cannes Film Festival in May), but I'll take it.
"A Trip to the Moon," for those who have not yet had the pleasure, is completely insane in the best way possible. It's about a group of scientists who design and execute a giant gun to shoot a capsule containing them at the moon. It works, naturally. Once on the moon, they battle moon people, before pushing their capsule off the edge of a cliff and falling back to Earth. And because it's a silent movie (and hand-tinted color at that!), visuals are everything, so every plot point is communicated with enormous gestures (lending the scientists an element of the eccentric), scantily-clad women are there for some sort of technical support, all of the backgrounds are gorgeously painted, and the moon people do cartwheels, 'cause hey, why not.
But it's a treat, it really is, so much so that I stuck around for a second viewing following the restoration presentation. The first time they presented it with a new score by the band Air, which was...interesting...if not terribly fitting. Modern scores on silent films can really run the gamut. The Alloy orchestra ones are particularly snazzy, utilizing a definitively modern take on classical music while still crafting tunes that fit the era in which they're working. But the Air score was so out there, so bombastic, it felt more like it was trying to bring change the film to suit a modern audience, rather than a modern audience to suit the film. The second showing was delightfully narrated by Randy Haberkamp, the Academy's Director of Education, with Bromberg on accompaniment. I suspect the best version lies somewhere in between.
In terms of its visual splendor, the print looked spectacular. Anytime you hear the story behind a massive restoration (in a far-too-long presentation - it was interesting material, but much of it got repeated over the course of the 45-minute lecture), you come away with so much more appreciation of what's in front of you. And this one was a doozy.
Essentially, when they received the color print, it was totally unusable. The nitrate film had solidified to resemble more of a brittle glass, making it impossible to project or digitally scan. Never mind the condition of the individual frames. What followed its acquisition in 1999 was a two-and-a-half-year process in which Bromberg and his team stuck the film in a gas chamber and slowly peeled away at it, bit by bit, sometimes removing as much as three or four frames, other times coming away with only a fraction of one. They photographed those elements using the best digital cameras available at the time.
And then they waited. Mostly for technology to catch up to what they had on hand. And, of course, for money.
Finally, in 2010, funding came through from the Academy, and the long process of editing all of those elements together to create a new, playable print began. The files were not well catalogued - utilizing different file formats and unclear labeling systems - so they had to basically go through each picture and visually match it up with a black-and-white version of the same frame in context. If they only had pieces of the frame, they had to be lined up, the seams digitally erased. In the case of missing or totally unusable frames (in which the damage was too great to clean up), a black-and-white master was used and digitally colored, using a process that mimicked the original hand-painted color. 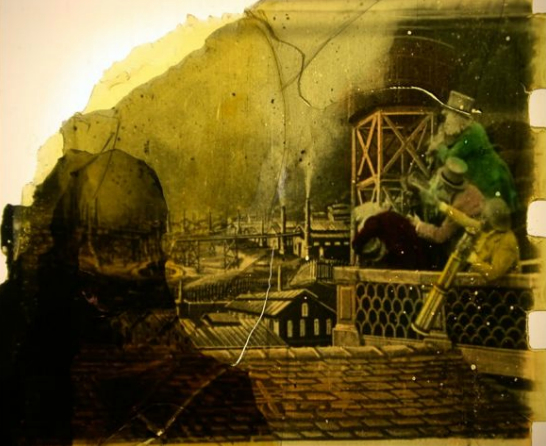 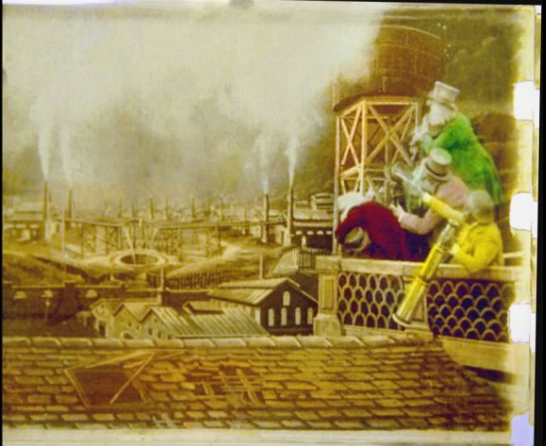 As with any restoration, this information can be vital to appreciating what's in front of you, so the second viewing following the presentation was much appreciated.
While we were standing in line, waiting to get in, the guy in front of me said he couldn't believe so many people had come out for it, and frankly neither could I, but I remarked that it was kind of refreshing. As hardcore cinephiles we too often dismiss contemporary culture readily disposing of the past and moving onto the next big thing, but over one thousand people turned up that evening to watch a program of films that were all (save for one) over one hundred years old. And that wasn't half as staggering as the films themselves.
Posted by Scott Nye at 7:16 PM