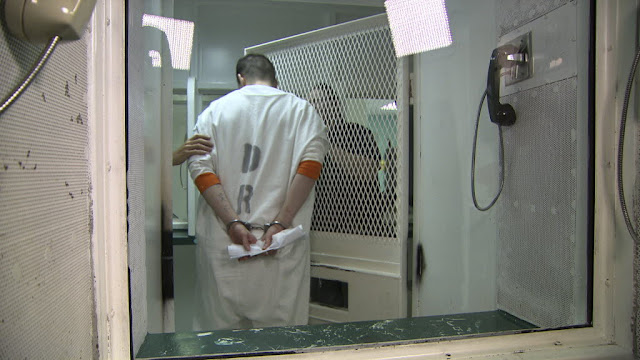 Rejoice and Shout - So, yes, admittedly, only an idiot would say the movie's a total loss. I mean, you get to sit and listen to all this great music, and typically watch some film of the performers doing it live. And man...that is a sight to see. Totally lives up to the title of the documentary. But, you know, as a documentary, as a piece of filmmaking, this couldn't have been any flatter. It's a strict chronological tale of the evolution of gospel music, focusing of course on its life pre-1960, but certainly touching on music made all the way up until, well...now, actually. But there's no pep to it. They talk to the same five people the whole damn time, and it quickly develops into a very predictable artist showcase, followed by several minutes of talking heads, then another artist, then...well, you get the idea. It's dry, dry, dry, even though the music couldn't be more ecstatic. Great subject, poor documentary.

Into the Abyss - Whoooo, baby, this was exhausting. Werner Herzog's latest film has been pushed as a documentary about the death penalty, and by the end it certainly takes on that subject as its thesis, but it focuses so specifically on one case that it's almost solely an exploration of only those people involved. But by taking on the larger issue towards the end, he really gets you to think about the societal and moral implications of the ever-controversial practice. I've been staunchly against the death penalty since I was 18 and really started diving into it, but even I could see the perspective of those who feel differently thanks to Herzog's film. Herzog, for what it's worth, isn't too fond of capital punishment either, but was good enough to give all of his subjects their due in the interviews. Fascinating story on its own with overwhelming implications.

Secret Sunshine - I'm not pleased to say that I don't really understand the overwhelming love for this one, but it's not one I'm ready to dismiss outright. Its totally unpredictable plot and tonal shifts are something to behold, as is the lead performance by Do-yeon Jeon. I found myself emotionally devastated quite frequently without ever feeling terribly caught up in either the protagonist or the plot. As a total work, I might have more appreciation for it a few weeks hence, but right now, I'm feeling the weight of aimless scenes and unsteady camerawork.
Posted by Scott Nye at 5:07 PM

Anytime disorders acquire difficult consequently you wish enclosed cash, having obtaining some variety of Strategy loan is that the foremost style and magnificence of home mortgage on the market for you. The user gets what quantity cash {you'll|you can|you may} need; an individual hold on to your current car additionally to the bulk folks typically program the actual issue in direction of automobile before the disposition check cashing for you choices will doubtless be settled entirely, specifically wherever event this type of issue can doubtless be come back to fit your desires no value additionally to noticeable. it's typically that simple.

When you get happened the catch of speedy day on-line day advances and check advancements, it's arduous and unreasonable to urge out. keep from the payday loans corona catch by and huge by investigation alternatives before giving associate degree outsized free pass to daily progress advancements propel business.