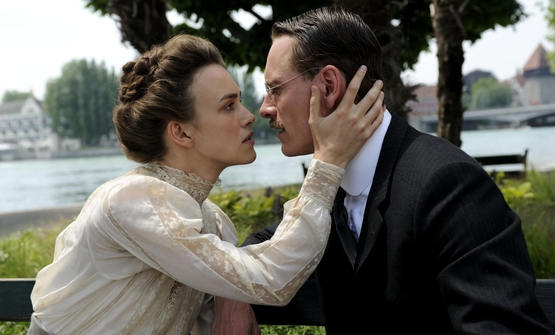 Time for a larger-than-normal edition of this little journal thingy to make up for lost time.
A Dangerous Method - Not the easiest film to love, but a superbly accomplished one nonetheless, and one of which I’ve become more fond as time goes by. Michael Fassbender and Keira Knightley really walk away with the film, and I really admire director David Cronenberg’s choice to let the sunshine in, as it were. Most directors doing a piece about some grittier psychological elements would opt for a more dour color palette, but the power of the film is not unrelated to contrasting a pristine location in an optimistic era with the behavior that one was encouraged, often insisted to hide or disguise. Doesn’t exactly provide the visceral thrills of the typical Cronenberg production, but hardly shortchanges the psychological probing.
My Week with Marilyn - I came away from the film feeling slightly more engaged than expected, but the ensuing time has not been kind. I now find it almost unforgivable, a weak attempt to pander to ideas of how we would’ve liked the period to exist without asking why we want it to exist that way. Michelle Williams is fine as Monroe, as is Kenneth Branagh as Laurence Olivier, but the film’s eternal quest to find its reason to exist is fruitless. The protagonist, Colin Clark, is not worth following, but provides the filmmakers just the right amount of distance so they can show you some of Marilyn Monroe without really getting to the beating heart of who she was and what drove her. It’s portrayal without introspection, and for arguably the most famous actress in motion picture history, that’s not enough.
Conan O’Brien Can’t Stop - Thoroughly enjoyable and surprisingly reflective. I don’t know how true to life this is, but O’Brien seems quite candid in the film and director Rodman Flender doesn’t shy away from the many instances in which his subject comes across as a bit of an asshole. It humanizes O’Brien tremendously, but it also humanizes celebrity - it takes quite a lot to make you sympathize with a guy whose biggest problem on a given night is that too many people want to talk to him, but the film effectively takes those sort of struggles and makes them credible. It’s also, no surprise, funny as hell.
Bellflower - Kind of blown away by the misogyny tags that have been leveled against the film, not because the film doesn’t depict a certain strain of woman-hating, but because I thought we’d all learned by now that just because a film portrays a certain behavior doesn’t mean it supports those ideals. The film is ultimately too slight and far too fractured to amount to much, but I found it viscerally satisfying in many regards and refreshingly honest about the effect of testosterone on the mind.
We Were Here - Achingly sad and surprisingly beautiful, this account of the AIDS epidemic, focused on the San Francisco gay community, is absolutely stunning. After briefly recapping the late ‘70s joyful period for the city, it launches right into a scenario far more terrifying than Steven Soderbergh’s considerable Contagion, because this time the government isn’t even trying to help. From the slow whispers to packed hospitals to the eventual stemming of its impact, the film analyzes the whole period at levels you probably never thought of before. Through the unimaginable tragedy, it also demonstrates the power of a community to come together in times of crisis, undefeated by the denial of help from those outside of it. One of the best films of the year, certainly.
Posted by Scott Nye at 9:44 PM

On the off probability just simply have evident feature for your automotive, you will get a programmed bad credit payday loans feature total up to $10,000. You’ll get money for your feature and keep your auto! Ezmoney is else a national fund credit provider providing fugitive advances in capital of yank state, Manchester, capital of yank state and past.