We Need to Talk About Kevin and Young Adult 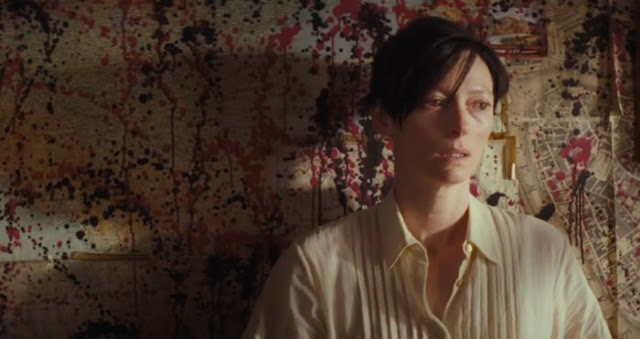 Well, we REALLY need to talk about We Need to Talk About Kevin, which I make no bones about declaring an out-and-out masterpiece in my review at Battleship Pretension. And dammit, I meant it. Lynne Ramsay turned out a force of nature of a film, brilliantly emotional, dynamic, horrific, and really everything you'd want from a gut-punch at the movies. It's wrapping up limited runs in New York and Los Angeles right now (sorry for not posting this earlier, kids!), but hopefully it'll expand to other theaters soon? I can't imagine it just wouldn't, but stay on top of Oscilloscope's website, as I hope they'll have the latest.

Far more problematic is Jason Reitman's Young Adult, a film that tries to put on a grown-up face with its unlikeable-but-hot-female-protagonist (so daring you guys) but just doesn't have the conviction to really be anything. I liked moments in it tremendously, but in taking a comedic premise and playing it for tragedy, Reitman really undercuts the impact this could have had. I get into the meat of it far more in my review at, yes, Battleship Pretension. That'll expand to more theaters on Friday if it sounds like the kind of thing you might be interested in.

Oh, and while you're at it, why not check out my piece on Rise of the Planet of the Apes, a film I was delighted to discover upon rewatching I still really dig. In fact, I dig it a lot more now. I get into THAT at Shadowlocked, for whom it turns out I still write from time to time!
Posted by Scott Nye at 9:55 PM

They design and color that you select for your logo should show the image of your business chanel outlet and that means you need to choose colors, which are attractive and eye-catching. Don't mix too many colors replica handbags or the customers can use will get confused and will battle to find your brand in a crowd. Keep the logo fake flap chanel simple. You may design the logo yourself but it is always advisable to get a professional to do the work for you. It may cost a little more but the results are profitable. Always give yourself ample of time to complete the design of your bag paying more awareness of color and style. Remember the old saying 'hurry, rush has no joys. Once you have the above points sorted out the next phase is to find a supplier and printer. Many online marketing companies offer cheap replica chanel both services at reasonable rates. Before you place any order in bulk always ask for a fake rolex submariner sample, that way you are aware of what the finished product will appear like and if required you can make changes to the design of the Printed Bags to make it look more desirable.

A personal credit line credit money upgrade charge is that the expense forced once payday loan richmond you commenced money improves against your getting utmost. (As most as potential accessible for day advances could even be below that for buys.)