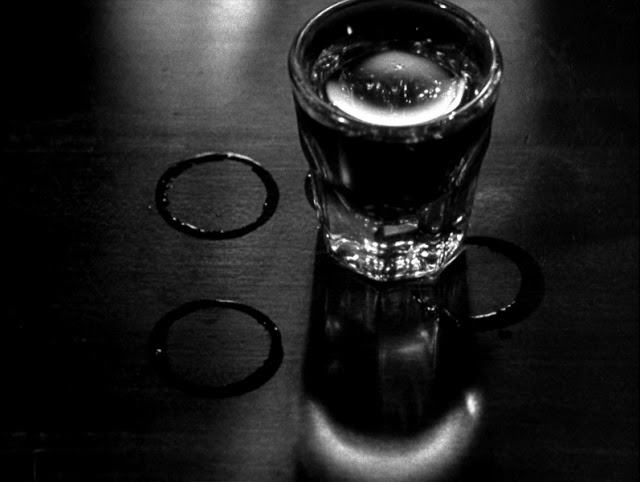 I liked DVD just fine, but boy do I loooooove Blu-ray. And the just-released Masters of Cinema editions of two bona fide Billy Wilder classics, Double Indemnity and The Lost Weekend, are great examples of why. Indemnity in particular is afforded a transfer that can only be described as "revelatory," finding immense detail in the shadows, and in its own small way, redefining film noir. Yeah, it might be terribly naval-gaze-y (or the result of a few too many brain cells burned off by my HDTV), but the manner in which a transfer is handled does legitimately contribute to film history. In this case, MoC's Double Indemnity edition reminds us that film noir is not about the deep, pitch-black shadows and high-contrast we sometimes associate with it, but rather the mission to plumb the darkest corners of the human soul. So there.

The Lost Weekend isn't quite as strong, pitching the contrast noticeably higher, but there's something about the wild, uncontrollable, pitch-black shadows that's pretty damn compelling itself. Needless to say (or perhaps not), both films are truly great pieces of drama, diligently scripted and emotionally taught, and are worth putting on your shelf if you're able to play Region B Blu-rays. MoC got ahold of some great supplements, and The Lost Weekend is almost worth purchasing just for the three-hour 1992 documentary that goes film-by-film through Wilder's entire career with the man himself. Of particular note, besides his considerable insight into his own career and the industry, is that Wilder speaks mostly German, peppered with English when it better suits his point. Pretty freaking cool if you ask me.

Beyond the fact that they were Wilder's third (Indemnity) and fourth (Weekend) American films, they're great companion pieces in a sort of exo-cinematic way as well - t'was Wilder's collaboration with the alcoholic writer Raymond Chandler on the former that inspired him to tackle the story of alcoholic writer Don Birnam in the latter. They also, IMHO as the kids say, represent the best of Wilder's intentions in his darker, more cynical period as a young filmmaker. Which is not to say they're the best of those films, and certainly not the best of Wilder. What I mean is that these two focused his total lack of faith in the human condition on humans rather than institutions (as in Ace in the Hole's journalism industry or Sunset Boulevard's Hollywood, and the overall dismissal of the mass entertainment that he just happened to master along the way). There's a humanist integrity sometimes missing from his middle-period works that make Double Indemnity and The Lost Weekend at once much smaller, yet quietly deeper.

Anyway, I reviewed both discs at CriterionCast, a wonderful website you should be visiting every single day. Twice on Sundays. Or, hell, twice today, why not.
Posted by Scott Nye at 11:46 AM