Mini-Reviews: The Invention of Lying, Zombieland 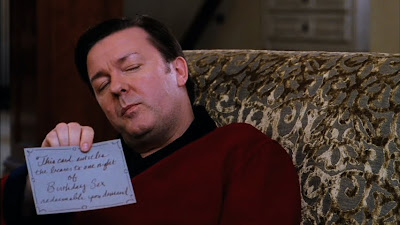 The Invention of Lying can join films like Mike Judge’s Idiocracy and Neill Blomkamp’s District 9 in that, when it’s just telling situations within the wonderful world it’s created, the film is nearly perfect, or at least totally undeniable. It’s when it tries to tell a story in the world, create some sort of arc…you know, the usual Robert McKee/Syd Field stuff, that’s where it goes totally astray. Everything in the set up of the world that cannot lie, and all the little situations that get peppered in after Mark (Ricky Gervais) starts lying, are gold. But the romantic subplot isn’t developed nearly well enough to justify being this guy’s central emotional journey, and too much emphasis is placed on the audience sympathizing with Mark to get away with straight satire. We see some downsides to the mistakes Mark makes with his new power, but the true weight of those decisions is never focused on, comically or dramatically, and so the whole reason this film is so interesting is tossed out in favor of a romance between Mark and Anna (Jennifer Garner) that has no spark, almost no chemistry, and is almost totally devoid of any tension, again, comically or dramatically. Basically, this is a satire trying to rework itself as a romantic comedy, and frankly, neither work.

Oddly enough, that didn’t end up being the weirdest movie I saw today, for I have witnessed…Zombieland, a film that would surely be the weirdest piece of mainstream entertainment this year had Jody Hill not unleashed Observe and Report. I would go back to the film with a stopwatch to figure out just how much screen time is spent on something involving actual zombies, but I can tell you right now it’s probably less than half. I mean, when your film is called Zombieland, you sort of expect a land completely overrun by zombies. And yet, I found myself liking the film a lot more when it deviated from its Zombie Survival, vaguely Shaun of the Dead roots and became this weird quasi character piece, only the characters couldn’t possibly be less interesting. Clear attempts are made to create memorable archetypes, but what we end up with are derivatives of archetypes (the borderline-psychotic who’s exceptional at his job, the antisocial geek, the tough-as-nails, emotionally closed hot chick, and the kick-ass pre-teen). And yet I cannot describe the weird appeal of these half-people driving down the road, having standard road trip conversations, or especially an extended sequence at a very unusual shelter, all in the context of a zombie infestation. It’s far from being a good film as such; even more than Snakes on a Plane, it’s trying way too hard to be a cult classic, and every major decision a character makes is motivated entirely by the screenwriter staring at the computer, wondering how the hell he’ll fill the movie’s running time without a bigger budget. Yet it possesses a rarified charm that places it far above its meager ambitions.
Posted by Scott Nye at 9:31 PM