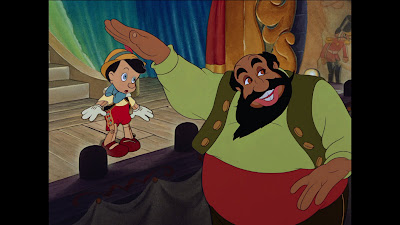 Most Disney films...really, most films in general...suffer a little bit by the "happily ever after" curse, which basically states that, by the end of the film, the conflict has to come to near-complete resolution, and the world will almost completely change as a result of this. Especially in Disney films, defeating a single person suddenly completely changes the tone of the entire world.

Not so with Pinocchio. There is no "bad guy." There are bad people, or bad forces (the whale), but they're not classically evil (as in, bent on destroying the main character). They're simply out to further their station in life by whatever means necessary, without any regard to the innocents standing in their way (an evil very relevant today, as it happens). The protagonists (Pinocchio, Jiminy Cricket, and Geppetto) are simply charged to do the best they can with the circumstances they are given, and must remain brave, and learn to make good, moral decisions in the face of everyday evil.

By the end of the film, these evils aren't defeated, and the world doesn't suddenly turn good. The world is still as grim and potentially threatening as it's been and will continue to be, but the characters (and the audience) have learned that being good isn't a simple statement. It involves the many choices we're faced with on a daily basis, and that being good is a constant choice.

I admire that kind of honesty, and more than anything else you could teach a kid, that's something worth knowing. Hell, it was a good reminder at 23, and by the looks of the world (still as grim and potentially dangerous as ever), it's not just kids who could learn a thing or two from the film.

It doesn't hurt when it looks this good.
Posted by Scott Nye at 6:22 PM