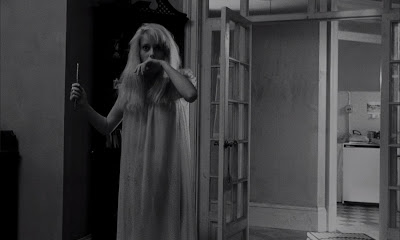 The one genre I am weak towards, however, is horror. Specifically, the kind that just jumps out at you constantly. As I often tell people, I simply don't have the constitution for it. It does nothing for me. That having been said, I'll make exceptions when necessary (John Carpenter's Halloween has been on my "to see" list for some time now), and I do love horror conceptually. It's just that instead of shocking me, I'd love it to just absolutely unnerve me. I'd love for it to just crawl inside me and sit there, unable to me removed.

Repulsion is one of those films, and so much more. As Polanski says in an interview included in the Criterion release (oh, yeah, the Blu-Ray is frickin' gorgeous, to the surprise of no one), he didn't make a horror film as such, but rather a film with a lot of horror in it. I mean, it's about a woman's final descent into madness. That can be a little horrifying.

I found it interesting that, in the same interview, Polanski said that he thinks character is the most important thing in cinema, because watching the film, I was less impressed with the characters than I was with the sheer filmmaking (which is, predictably given Polanski at the helm, astounding). But the more I thought about it, the more I realize that Polanski really wrapped his form around the character of Carol. Not just because we see the world - specifically, the apartment in which she spends most of her time and seems almost trapped in - through her eyes, but the camera moves, editing, set-ups, focal lengths, lens choices, lighting, everything involved in the look of the thing is to put us in her frame of mind.

What really blew me away was just how sensitive it was towards women. Given that he has three or four guys rape her in the film (and given Polanski's eventual destiny), many have read misogyny into his work, but frankly, the men get the short end of the stick here. All of the men here are portrayed as only interested in sex and a good time; the simple fact that the main supporting male character actually believes himself in love with Carol is about as damning an appraisal of men as there is. I mean, she's beautiful, but she's completely emotionally cut off and has not an ounce of personality. What else could he really want?

Ultimately, as thrilling as the picture is, it's the exploration of gender identity and politics, and especially sexual repression that make the film a classic, one definitely worth visiting.